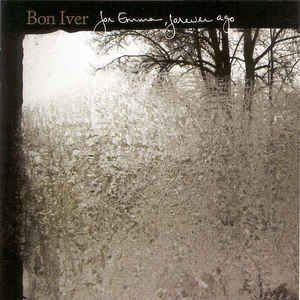 Bon Iver - For Emma, Forever Ago


Track B5 is listed as "re: stacks" on the release.

It's hard to believe that For Emma, Forever Ago is the work of one man. But when Justin Vernon's old band split he hauled himself (and presumably plenty of instruments and recording equipment) to his dad's hunting cabin in the woods of Wisconsin for the coldest season and worked through his issues in musical form. (The name comes from the French for "good winter"--"bon hiver"). By the start of the spring thaw he had recorded the bulk of this stunning debut, originally self-issued to acclaim last year in the USA and now picked up for a British release. Vernon's voice grabs the ear from the start, switching easily into a smooth falsetto (and unusually for a white indie lad, without the slightest intent of emulating Prince). The formula is straightforward. He layers his vocal harmonies, while a gently strummed acoustic rhythm guitar just about holds the centre. All else from horns to slide guitar is mere detail. The quality is rough and ready but the effect is strangely similar though to the slick vocal confections of European women like Bjork and Camille, all mystery and distance. It's the musical equivalent of reading someone else's diary. In code. Through a dirty window. Enigmatic songs like the elegantly stumbling "Creature Fear" with its rowdy horn parts, the resolute opener "Flume" and the evanescent "Team" are just so pretty they seem to glide by without leaving a mark in the snow. Vernon is apparently a straightforward and friendly guy, but For Emma, Forever Ago genuinely sounds like something from a far off place.

I can see why reaction to Bon Iver is so fragmented. There are those who hail it an instant epic, and others who think its pastoral nonsense. I'm somewhat in the middle - granted, these sorts of slow burner indie-folk albums aren't for everybody, but there is definitely something more special about this particular album - more so because its a concept album about that most universal of animals - lost love.

While the harmonies here are subdued and very, very slow-paced, the atmosphere of the entire album is what makes it work. There is a heady iciness to the entire venture, a sort of morbid sadness even, one that permeates every single track. Like Camille's "Le Fil" which had a drone running through each song (and for minutes after the last song played), this mood of sombre melancholy is present in spades on this album, and this also works for it.

The centerpiece is the two-suite "The Wolves" and the luminous "Team". None of these songs work especially well on their own. Like any good novel, each song blends into the other so that the album needs to be listened to in chronological order. Bon Iver's mastery of the sparse musical medium is astounding, and the way he makes every track here speak its' own unique brand of solitudinal longing, is a work of art waiting to be unraveled.


Bon Iver - For Emma, Forever Ago - A Take Away Show

This is so beautiful and soulful and full of emotion. It brings me to tears every time I watch it.


I think he must have had some serious pain somewhere in his lifetime to make music this painful, and this beautiful.