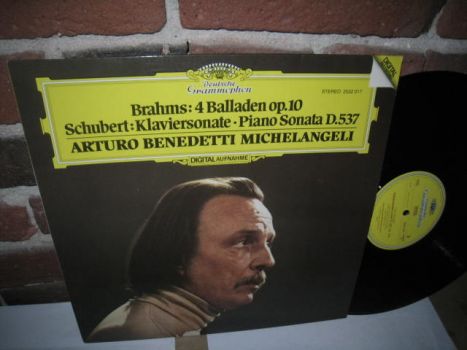 
How should I describe these recordings in a single word, if so was required? Luckily it isn't , but I would not hesitate in taking the word Majesty in use. I have rarely heard recordings more deserving of such characterization. Arturo Benedetti Michelangeli is the aristocrat of the piano par excellence, and his selfassuring extrovert manner saturates these diverse and magnificent works.

I have a profound and longlasting loveaffair with Brahms' four Ballades, op.10. In my universe it has been the deeply felt recording of Emil Gilels that have been the natural choice. Gilels' introspective and pondering visions still strike me as essential in the ballades, but however different the Michelangeli recording is now one I wouldn't be without, for the world. The readings of these two titans of the piano are in many respects contrary to eachother, in their diverse expressions. Gilels' is a dark and brooding vision luring the listener towards the depths with hypnotic persistence. The introverted expression leaves one with a feeling of witnessing a deeply psychological yet quiet drama. Michelangeli's vision is one accentuating less of the immesurable depths of the Gilels universe, concentrating perhaps more on surface, on a greater variety in tempi and sonorance. And by goodness Michelangeli is shining in the ballads - or rather he makes them shine, in all their glory. He is presenting us with an account of unusual authority, making one believe in alternative visions a hard task. The Brahms ballades have rarely if ever been presented in a more radiating manner.

The Schubert sonata in A-minor, D.537, one of the lesser known siblings of the Schubert sonata family, where the composer employs the theme we know from the finale of his penultimale sonata D.959. Apart from this theme, here to be found in the middle movement, there are few things reminding us of the great Schubert sonatas to come. This rather lighthearted work recieves a fine and powerful performance by Michelangeli. His is an approach not concerned with the very broad tempi chosen by some Schubertians, nor with the desire to penetrate some profound human truth in the depths of the music. His is a fresh execution, almost regal in posture, driving the music unsentimentally forward. This drive gives room for my only reservation as this disc is concerned. Michelangeli's Schubert is surely alluring in its tremendous presence, but I sometimes find him forcing the music somewhat, burying the elements of beauty most fragile, so often present in the sonatas of Franz Schubert. But as an alternative to other established Schubertians, Michelangeli makes a worthwhile choice.