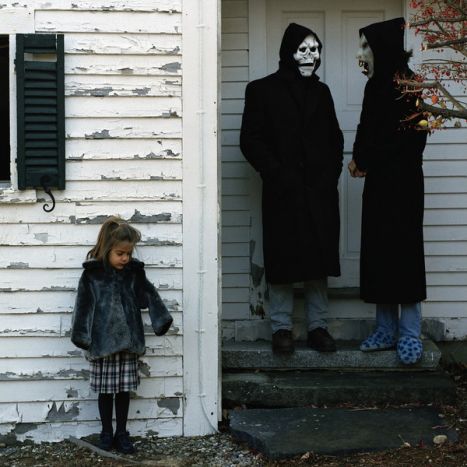 Brand New - The Devil And God Are Raging Inside Me

Brand New have specialized in pain ever since the pop-punk emo-rage of their 2001 debut release Your Favorite Weapon. But they've outdone themselves on The Devil and God Are Raging Inside Me. If the songs on Weapon were paper cuts, the ones here are gaping chainsaw wounds, full of seismic, howling agony. The moody rumbles of 2003's Deja Entendu were pointing here, but this is something else, with Mogwai-level dynamic range and tracks that careen from introspection to fury and back again. Lyrically, lead singer Jesse Lacey's words remain excruciating and harrowing things, but that's nothing new.

It's the music propping them up which gives this effort such depth and punch. "Degausser" starts so innocently, then uses a bridge augmented with a bitter children's chorus straight out of The Wall as a lead in to Lacey's bitter refrain of "I'll never say anything right." Then there's the nearly 8-minute "Limousine (MS Rebridge)," epic, and epically sad, constantly threatening to descend into pure cacophony (and eventually succeeding). Repeated listens will tune your ear to the band's still-intact pop sense (especially on "Not the Sun" and "The Archers Bows Have Broken"), which keeps the record lively and unpredictable, and away from becoming a depressing, head-in-the-oven mope. Brand New went through three years of intense recording sessions to make it happen, but it was worth the effort.

Well, this albums been out for about a month now and i've listened to it about 30 times roughly. i've blasted it in my car, fallen asleep to it on a few occasions, and i've listened to it very thoroughly with headphones while reading the lyrics. even though it took about 3 years to get the nerve to write a review on "deja entendu", I believe I'm ready to announce judgement on "the devil and god are raging inside me". I'll try to do this from a musical and open-minded approach rather than being bias about the album.

My final judgement of the album is that it's GENIUS. it's a flat-out amazing record that blurs together genres as well as ditch some as well. their first album "your favorite weapon" was an amazing record and I consider it to be pop punk done right with an "edge" to it. the huge transition and progression from "weapon..." to their second album "deja entendu" was nearly catastrophic as every one knows. I didn't think I was hearing the same band when i listened to that record at first. it took about 8 listens to realize what "deja" was all about and that's when i found it's genius within.

beware (or rejoice) brand new fans, because brand new have evolved and progressed once again. they basically ditch all of their old ideas and song structures on weapon and deja and have created a new record and sound with amazing guitars, clever/meaningful lyrics, and just stunning music! it took me awhile to figure out how to write a review on deja so this one won't be easy as well. so here it goes, and i hope it gives people an insight of what this new offering sounds like from brand new.

the 3 biggest overall changes i noticed with this album are the following:

1) the overall dark theme of all the songs....even though brand new was darker on "deja" than "weapon", they show it even more on this album. the album gives off extremely dark imagery and is very emotional and could be considered depressing to some. i wonder where they got some of these riffs because some of them are just plain haunting and eerie. this is definitely not a negative thing, because it relates to the lyrics and songs which in turn makes them deep and meaningful.

2) the songs are overall slower and jesse's vocal delivery....jesse's vocal delivery on this album usually starts off with a soft-spoken whisper then explodes into this emotional frenzy of screaming. most of the songs are like this and have no pattern to them whatsoever which makes this album a hard listen for some brand new fans. the switch to quiet to loud isn't overwhelming on every song except for on the tracks "you won't know" and "luca" where it's actually kind of disturbing. however, there are a few songs on here that have a dance vibe to them but still very dark and desperate sounding ("not the sun","archers") as well as a few acoustic songs that keep the same rythm throughout the songs ("jesus christ","handcuffs"). it's a very "interesting" style to say the least.

3) finally, a phenomenal improvement on the guitars....this is what stood out to me initially upon the first couple of listens and is why i instantly fell in love with the album. the guitars on here are progressive-sounding in the likes of pink floyd, the who, the smiths, the cure, etc. and just have a classic sound to them. the crescendos on this album along with the guitar parts are what really make this album shine IMO. you have to hear it to know what i'm saying. for example, check out the end of "limousine".

a lot of people are saying this is brand new's version of radiohead's "the bends" album. i disagree with that. i believe deja entendu was brand new's "the bends" album and "the devil and god are raging inside me" is their "ok computer". i have a feeling that brand new's next album will be a bomb dropped on music listeners like radiohead's "kid A" was to fans. i guess we'll have to anxiously wait and see. as for influences on this album, radio head is present. also, i can't help to hear modest mouse in a lot of the songs. you can also tell that their good friends in Nightmare of you have rubbed off on their music giving a dancey feel like in the songs "archers" and "not the sun". lastly, you can hear a heavy influence of older bands like the smiths, the cure, and joy division. every track is amazing in it's own right but the true standouts to me are "sowing season (yeah)", "jesus christ", "degausser", "you won't know", and "not the sun".

those were the 3 biggest changes/improvements i found on the album. it's a real piece of art and is going to be a classic album that will stand the test of time for rock music. forget emo, heartcore, screamo and all those meaningless cliche terms...this is a mature rock album that will define great music in the 2000 era and will be talked about years and decades from now. i'm not going to say if it's better or worse than "deja entendu" because that's the album everyone's comparing it to. they are both great, amazing albums that everyone should hear or give a chance. i recommend to anyone and everyone but i can't help to feel that you have to be open minded, somewhat intelligent, and be able to appreciate meaning with music to enjoy brand new or this album. if your music library is limited to rap, country, and commerical rock...chances are you're not going to understand or appreciate this album. since your reading this review, you're probably not one of those people. highly recommended, of course, and if you get the chance...let people who are not familiar with brand new hear this album. it might just change their taste in music for the better.