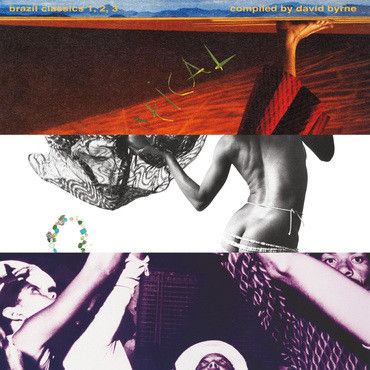 Limited edition colored vinyl, three LP box set, with new notes from David Byrne—celebrating the 30 year anniversary of the release of Byrne's seminal collection of some of the most important artists in Brazilian Music. A ground breaking series of albums when first issued, they sold over half a million copies and turned so many people on to amazing music—from a country where people didn't sing in English. In a way the first “world" compilation, the very first Luaka Bop release and a killer set of albums.

Compiled by former Talking Head David Byrne and released in 1989, with liner notes and translations by Arto Lindsay, Beleza Tropical documents a New York hipster's first infatuation with the rich, deep, and varied spectrum of Brazilian popular music from the rebellious '70s. There are better Brazilian anthologies, but none so clearly assembled in order to counter the received opinion of Brazilian music as lightweight bachelor-pad fluff (although Milton Nascimento, with his beautiful high tenor, sometimes comes close).

Caetano Veloso (whose magnificent "Terra" is itself worth the price of admission) and Gilberto Gil are remarkable lyricists whose music is influenced as much by the Afro-Brazilian rhythms of northern Brazil as by the Beatles. Jorge Ben contributes a pair of highfalutin yet funky soccer songs, Chico Buarque is at his most uncompromisingly poetic, and Nazare Pereira taps deep into Brazilian folklore.

"Beleza Tropical" is the first in a four part series of Brazilian music assembled by David Byrne. The three albums that are still in print are all fantastic - I highly recommend each one. Byrne has selected some prime offerings from the biggest names in MPB (Musica Popular Brasileira - it's easily translatable)for this album, almost exclusively from the 1970s, at the highpoint of the genre (Caetano Veloso, Jorge Ben, Gilberto Gil, Milton Nascimento). If I were to make any criticism it is that the artists are rather narrowly represented, with only the biggest names present on multiple tracks, but having said that, the tracks are all great, and this does provide some greater insight into the work of those artists. In particular, the three Jorge Ben songs are fantastic and the the two Chico Buarque songs are also outstanding

" I heard this music when I visited Salvador, Bahia for the first time in 1986(?). Forro was not a sound I expected to hear. It sounded like a mixture of Ska with Polka!  The closest equivalent I knew of was Zydeco, the music made familiar by the late great Clifton Chenier and many others. In Salvador RADIO ITAPARICA! had a great morning show which would sometimes play, without interruption, a whole string of what I later found out were Forró hybrids—Forró with brass, Forró with funk bass lines, Forró with country fiddles, and, of course, electrified Forró, or Fo-rock, as it is called. I taped as much as I could off the radio, and later bought some records and tapes. I only touched the surface, the well is deep.

This is party music. It’s party music from people who’ve been through hard times, who live in a parched, unforgiving area of Brazil, the Northeast. They love their country, their land, probably more than they love Brazil, which has not always treated them well. The people who make and dance to this music are most often brown. Like their earth. It is the brown sound. Chão. The festas are intense and the bands would play all night, when one band got tired, they would take a nap, or drink, or eat, and another band would take over. Until the sun came up.

As pictured on their record covers, many forro stars dress in spectacular costumes based on the outfits of the cowboys and outlaws of the Brazilian Northeast. I guess it could be compared to the North American country and western gear. The stage costumes of Hank Williams (Sr.) and now Dwight Yokum convey a similar spirit. The amazing hats that Luiz Gonzaga and others wear  have their source in the Brazilian cowboy work hat, although the stage hats have evolved and mutated into something wonderfully new that refers to the originals, but says so much more. Symbolic of their humble origins, but now elevated to a more theatrical and poetic level.

The songs celebrate their land, parties and festas, lost love, and the hard life of the Brazilian cowboys.  Themes similar to Zydeco and other musics the world over, but here with a peculiar Northeastern slant.  A humor and wink that cuts through the bullshit."