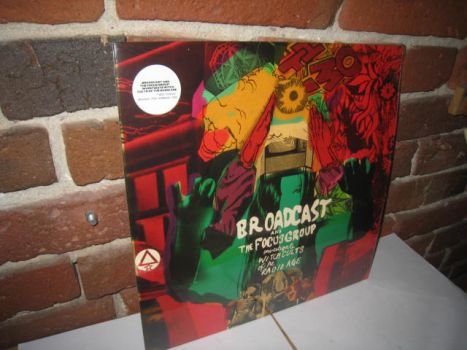 Skip to the beginning of the images gallery
Details
Broadcast And The Focus Group: Investigate Witch Cults of The Radio Age


in 2009 Broadcast were back with a new unique psychedelic collaborative album with renowned graphic and musical artist JULIAN HOUSE (aka THE FOCUS GROUP) titled, 'Broadcast & The Focus Group Investigate Witch Cults of the Radio Age'. BROADCAST (Trish Keenan & James Cargill), have collaborated with renowned designer Julian House (aka The Focus Group) to create a unique album pulling in both collaborators' unique sense of melody and love of library music and film scores. After a long hiatus, it can be said with confidence that Broadcast's return is greeted with much anticipation. From their beginnings in 1995, Broadcast's aesthetic has remained a combination of their love for film, library music and electronics with psych-pop colour - a style which has gained them an enthusiastic fanbase including musicians such as FLYING LOTUS, STEREOLAB, GRIZZLY BEAR, ATLAS SOUND (who they are now sharing a co-headline tour of the US) and DANGERMOUSE. Their music is also a popular choice for film and TV, feat. on the soundtracks of many films as well as TV shows such as "The L-Word", "Skins" and "CSI".


First I would say this album is not to be listened to in pieces, or by favorite track. It's almost a modern rebirth of concept full albums as we're starting to see everywhere, even with the Flaming Lips newest release "Embryonic." This Broadcast collaboration is a selection of sounds and voice to fit a time when your willing to completely shut up and experience.

The shift between tracks that contain a memorable melody, beat and tracks that are an imagination of ambience plays almost as a reflection of Sgt. Pepper's Lonely Hearts Club Band at times and definetely has futuristic interpretations of a beatelesque sound, especially in "The Be Colony."

The drums pull from acid jazz, jazz, and hip-hop as is typical in Broadcast releases, giving it that trip-hop feel at times, but just when you think they've played what will be a looped clip for the next four minutes of a song, the sound is forgotten and goes away.

I understand the fear of experiencing this while under the influence of something, but the human element really is there, it isn't machine at all, both in it's continuity and it's refusal to repeat. It's like a completely organic sound expressed through the tissue of what seems as inanimate things. Half of modern music has the ability to produce a bad trip if someone is doing drugs, so that's really not a fair method of review...that being said the sound does get a bit over the top at times. In the psychadelic light of the music, the pull from a general flow to a climax of sound, leaves an incredible amount of suspence, such as in "Ritual / Looking In" which can be uncomfortable at times. The sound of animals also adds a strange factor, and could really trip a tripper out..kind of like a coco rosie's album. This factor though adds to the complete feel this album gives, sometimes you're left flying, drowning, in a forest, in the snow and all in sound.

This review might seem a bit metaphoric in its description but it's rather necessary to get it's undestanding across. The mixing is beautifully done, and sometimes carries with it a bit of poking fun at the elements used in echo and ambience to remind the listener that they are in complete control of their technique.

This album is warm, wise, sarcastic and pretty genius if you understand the genre..capable of surprising even the most avid Broadcast fan.

Broadcast And The Focus Group - Make My Sleep His Song