Broadcast - The Noise Made By People - 2000 Indie Electronic Experiment LP 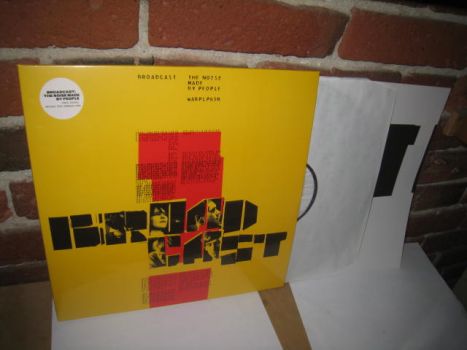 
After being mired in the studio for nearly three years, Broadcast returned with their first proper full-length album, The Noise Made by People, a collection of more shimmering, weightless pop that is nostalgic for yesterday's visions of the future but remains on the cutting edge of contemporary music. Where their early singles (collected on 1997's Work and Non-Work) painted small, quaint portraits of their retro-futurism, The Noise Made by People delivers their sound in widescreen, filmic grandeur. Richly layered yet airy pieces like the album bookends, "Long Was the Year" and "Dead the Long Year," seamlessly blend symphonic, electronic, and pop elements into smoky, evocative epics, while synth-based interludes such as "Minus One" and "The Tower of Our Tuning" present Broadcast's more detached, scientific side. Likewise, Trish Keenan's air-conditioned vocals sometime suggest a robotized Sandie Shaw or Cilla Black, but her humanity peeks out on "Come on Let's Go" and "Papercuts." "Echo's Answer" and "Until Then" are two of the other highlights from the album, which despite all of its chilly unearthliness, is a noise made by (very talented) people.
Amazon.com

Back in 1997, U.K.-based Warp Records released a quirky mini-album of rare material from its newest signing, a little-known experimental pop band from Birmingham called Broadcast. Eyebrows were raised. Why had Warp--a hard-edged techno label famed for its avant-garde output from electronic pioneers like Aphex Twin--signed this quirky, retro- obsessed West Midlands five-piece? The reason is simple: Broadcast is a very talented band. This much is proved by their brilliant debut, The Noise Made by People. The album's skewed electronic pop and retrofuturism most resemble the analog styling of Stereolab and original krautrock musicians such as Can and Neu. Yet Broadcast's sound is wonderfully unique, an enchanting mixture of analog synth sounds and West Coast psychedelia fused with '90s electronica and indie-pop sensibilities. With the addition of haunting and occasionally chilling vocals from singer Trish Keenan, the effect is at times mesmerizing. The Noise Made by People is an eerie, uplifting, and enchanting debut album from one of Britain's best-kept secrets.


Twelve new tracks that add new dimensions to their work, developing their dream-like sound into further dark and uncharted waters. Broadcast are full of contradictions, they somehow manage to sound lush and lo-fi all at once, their elegance and individuality is wonderful and addictive. They can also balance sounding cheery and poppy yet ominously dark all same time ("Come On Let's Go" for example). A hard trick to pull off, but they do it.
The Noise Made By People utilises samples and loops less than their previous work. Although the sound is often rich and dense they are not afraid to trim the sound back to the basics and pause into silence where necessary ("Echoes Answer"). Broadcast share a sense of minimalism reminiscent of indie gods Young Marble Giants (although more technically sophisticated, and have sampling technology on their side). And the comparisons don't end there, the lyrics are stylistically similar and share the austere melancholy of YMG.

This is an album that will stay with you if you let it. Recommended for those with a sense of adventure and an appreciation of outré pop music.

Broadcast - Until Then (Picnic At Hanging Rock)

Broadcast - Tower Of Our Tuning