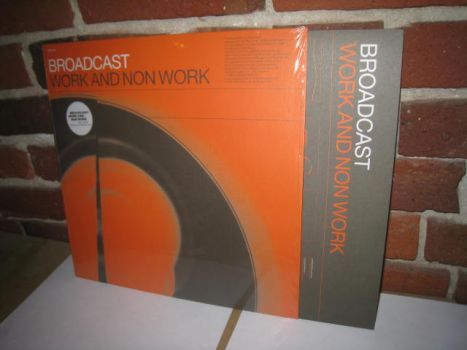 Track durations not listed on release.


I would recommend this LP to anyone who enjoys good electronica. Some people seem to be unhappy that Work & Non-Work does not satify Stereolab/Portishead fans. My advice: buy stereolab if it's stereolab you want; go listen to portishead if you don't want to venture outside that particular sonic landscape.

Broadcast is Broadcast, not an inferior carbon copy of any other band. Conversely, I don't think the accusation of the lack of originality is sound. Yes, the dark and theatrical sounds do resemble Portishead and Goldfrapp. Yes, it is somewhat like a less cerebal version of Stereolab. Just because their music belong to roughly the same genre doesn't mean anyone is ripping off anybody's music. It's a paranoia many music fans share. (Btw, isn't originality nothing more than a myth, a musician's fantasy?) I've listened to this LP many many times. My conclusion - Broadcast is not aping any other band.

This band has a very 60's sci-fi psych flavor with a contemporary/indie sound if you know what I mean. It's spooky but not dark. It's melodic and has a texture of film and analog tape but with a slightly jazzy drumset sound...It's a bunch of interesting things put together in a modern way.