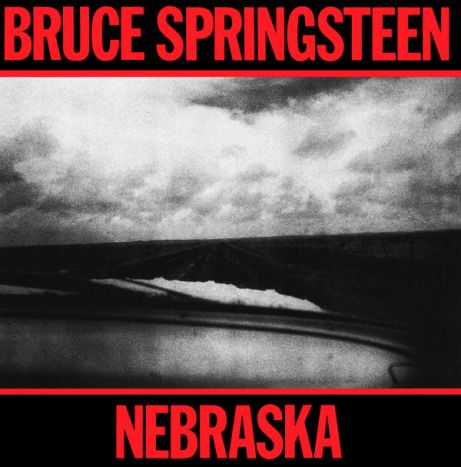 
One of the truly great pieces of Art in American recording history, NEBRASKA explores the dark stories of the characters who chose to take to the road in THE RIVER.
They hit middle America and go crazy. Simple as that.

These are stories of killers and cops, truck drivers and, frankly, people who have been driven to such a degree that they can no longer find their way through the comprimises and grey areas that they find themselves swimming in.

I've always been fascinated by Springsteen's phrasing on NEBRASKA. "Me and her went for a ride, sir." There's always that "sir," or "mister," and the wording is sparse. To me, these songs sound like death row confessions.

To me, "Atlantic City" ranks as one of Springsteen's finest moment, a tough-as-nails story of a man comprimising his own morals/ethics in order to get himself and his wife out of a dying town--and considering the unimaginable in order to finance their escape. But he still needs to console himself, rationalize his decision, before he can live with it:

"I've been looking for a job but it's hard to find. Down here it's just winners and losers, and don't get caught on the wrong side of that line. Well, I'm tired of coming out on this losing end. So honey last night I met this guy and I'm gonna do a little favor for him...but I guess everything dies baby, that's a fact, but maybe everything that dies one day comes back..."

NEBRASKA is not a fun-time party album. It's dangerous to listen to it in your car at 3 a.m.. But it is a piece of perfection, a story of the cultural decay Springsteen and his characters found in the USA in 1982, stories of desperate people in bad situations. It is a record that will be just as vital and important in 100 years as it was upon it's release.

NEBRASKA is true Art of the highest order.

This is Nebraska live on a 12 string guitar with harmonica from the first of the two benefit shows in Los Angeles in November 1990.

Just got the album from my friend who is a Bruce fanatic, really emotional and stripped. Nothing like it, this is my favorite song off it. Reminds me of the Sopranos when Tony dreams. Love it regardless

This is Bruce's "abbey road"..
at the end of every hard earned day you can still find some reason to believe! Just Beautiful!