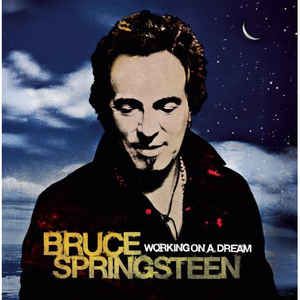 Bruce Springsteen - Working On A Dream

Notes: 13 NEW SONGS with the E STREET BAND including "My Lucky Day", "The Wrestler" & "Outlaw Pete". Presented in 180 gram vinyl.
Includes code for free MP3 download of this album.

"Working On A Dream" is his 24th album and the fourth collaboration between Bruce Springsteen and producer Brendan O''Brien.
The album was recorded at Southern Tracks in Atlanta, L.A., New York and New Jersey, and has echoes of the Californian music scene of the mid-60s, with shades of Brian Wilson circa 1966, pulsing through at various times.
It could be viewed as an extension to 2007's Magic, as the Boss finished that album he carried on writing material.
While "Magic" is a record underscored by fear, disgust and shame at the direction of his country under the previous America administration, now, as he plays to inaugurate the new president, the weight seems to have been lifted.
The most political thing about "Working On A Dream" is that it is not political at all.
The album dwells on love and optimism instead of political discontent. The effect is like a superhero looking down on a society safely returned to normality, saying "my work here is done".
And those new songs are reflections on love, life and death and all points in between as only the romantic aspect of Springsteen can conjure.
The mood is set by the opener "Outlaw Pete", a tongue-in-cheek ballad ('at six months old he'd done three months in jail, he robbed a bank in his diapers and little bare baby feet') and western epic that's more Howard Hawks than Clint Eastwood and all the better for it.
Otherwise the songs are tight, Springsteen forgoing length for impact, and the hits roll: the touching "Queen of the Supermarket" - which is about nothing more profound than fancying a checkout girl - , the raucous swamp-blues "Good Eye", the Macca-tastic "Surprise, Surprise" and the beautiful, brooding "The Last Carnival", which alludes to the death last year of E Street Band keyboardist Danny Federici.
Where he once bristled with testosterone-fuelled certainty in "She's The One", he is now in love.
"My Lucky Day" and "Surprise, Surprise" are exuberant love songs, and Bruce Springsteen's joy at a bright future shines through.
This album resounds with the same passion as Born in the U.S.A. a quarter of a century ago, less relentlessly intense but no less of its time.
The album wraps with "The Wrestler", featured in the new Mickey Rourke film about a has-been grapple king directed by Darren Aronofsky.
All in all, this is an album which shows Bruce's passionate, joyously outstanding pop world

Bruce Springsteen - The Wrestler (Behind the Scenes) video