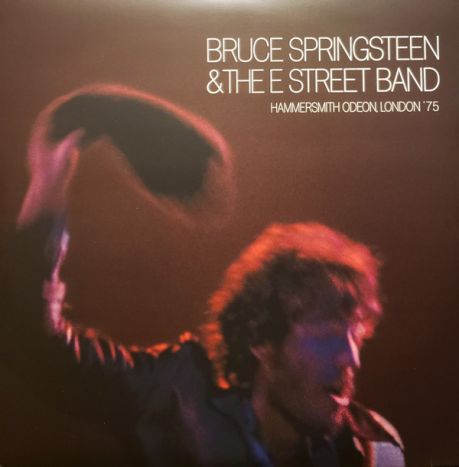 "Ironically, it would be decades before the first full-length Springsteen show was released as an album. That show would be his November 1975 performance at London’s Hammersmith Odeon theater—. Among the most celebrated nights in Springsteen’s career, Hammersmith Odeon, London ’75 captures the potent combination of determination, ambition, and vulnerability that makes Bruce’s early years so fascinating. Taking place three months after the release of Born to Run and several weeks after he graced the cover of both Time and Newsweek, this show would be his first outside the U.S. Same goes for the E Street Band, now solidified into a sturdy six-man rock group, after stints from jazz musicians and a violinist. “Finally,” proclaimed posters splattered around the city (which Springsteen allegedly tore down in a fit of nervous rage before the show), “London is ready for Bruce Springsteen and the E Street Band.”

While many of Springsteen’s 24 recorded songs at this point were precisely about breaking out of your hometown, proving yourself to the world, and never looking back, his Hammersmith performance feels gloriously unrehearsed. At the 3,500-seat venue, Springsteen effectively separated himself from the crowd—turning his back to them, pulling his thick wool cap over his eyes, and literally crawling into a hole during the breakdown in “Spirit in the Night.” When he tries to make conversation, his storied ability of connecting to an audience is not on display: “So, how’s things going over here in England and stuff, eh? Alright?” he asks, before doubling over in laughter: “I never been here before.”

His unrefined energy carries the show. It took Springsteen six months to record “Born to Run,” but it takes him just four minutes to blast through it, a mere six songs into the set. The band proceeds with a shaky, sloppy spirit, landing miles away from the arena workhorse the song would evolve into. More practiced tunes like “4th of July, Asbury Park (Sandy)” and “It’s Hard to Be a Saint in the City” are amplified and energized. When the songs reach their climaxes, Springsteen backs off the mic and lets his band overpower him, with massive waves of catharsis from Stevie Van Zandt’s lead guitar and Clarence Clemons’ saxophone." ( pitchfork)