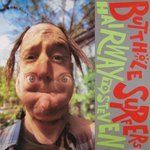 
B1 John E. Smoke
B2 Rocky
B3 Julio Iglesias
B4 Backass
B5 Fart Song

The Surfers followed up the quintessential "anti" album, Locust Abortion Technician, with their most accessible album to date, Hairway to Steven. This would be their last album with second drummer, Teresa Nervosa, and their final full length on their longtime label, Touch & Go. After this one Gibby Haynes and crew would undergo several overhauls in an attempt to win over a large audience - attempts that would ultimately fail with the exception of their breakout Beck-wannabe "Pepper" single. But before all of that nonsense, The Butthole Surfers were the unsung heroes of the indie avant-garde, churning out slabs full of irreverent filler material that sounded like a bunch of kids goofing around in a studio... and those who understood, loved them for it.

The Butts were so hardcore so as to not even include song titles for Hairway to Steven - each song instead represented by its own individual doodle. The tunes eventually obtained names through bootlegs and live albums over time. Right off the bat Gibby Haynes shows that his use of the infamous "Gibbytronics" machine is in full swing with a down-tuned "I'm soiled, soil me... Soil all of you..." His vocals take the same road as the previous album with sped-up and slowed-down multi-tap delays, reverbs, and pitch-shifters. Long gone are the days when he would just scream his head off through a megaphone - this is high-tech studio wizardry in a 1988, independent band sort of way. He alternates between his typical wailing and his talk-sing free banter. Whether or not Gibby wrote lyrics or winged it in the old days is still up for debate in my book.

On the music end of things, guitarist Paul Leary is still very much the focal point. He is easily one of the most ambitious and recognizable guitars in this genre. His riffs are one of a kind and his lead harmonies are distinctly his very own. His strangulation in album opener, "Jimi" combines a catchy hook with ghost-notes and accidental (?) feedback that goes from competency to some guy who has never played guitar before. Leary was one of the only guitarists who could play something so sloppy, yet at the same time sound so intentional and accomplished.

As mentioned, Hairway to Steven is easily this band's most approachable work of the Touch & Go era. For the first time since the debut, there are cohesive tunes with a beginning, middle, and end. Even the more novelty-type tunes like Julio Iglesias and John E. Smoke have a more composed feel to them - a sharp contrast to the last 2 albums that had loads of filler that sounded improvised. Because of this, both Leary and bass player Jeff Pinkus show they are not only competent musicians, but they can write some pretty tunes as well. Soulful moments are abound in the pseudo-ballad "I Saw an X-Ray of a Girl Passing Gas" and companion tracks "Ricky" and "Rocky." Haynes delivers on these as well, proving he does not always have to hide behind vocal effects. The double drumming is another standout point in the album and it is more prominent than ever before particularly on the aforementioned "Rocky," the album's jam song, "Backass,"

The Butthole Surfers were definitely an acquired taste, and the majority of my friends back in the day could not stand it when I forced it upon them. The 90's saw this band cleaning up their act and searching for fame. After Haynes' appearance on the mildly success Ministry hit "Jesus Built My Hotrod," The Surfers would change their approach drastically and eventually gain a plethora of fly-by-night fans who knew nothing of their past, and would abandon them once the novelty wore off. Then there are those of us who knew their legacy and appreciated their defiant approach to music. If you are new to their past, Hairway to Steven can be the perfect stepping stone to some of their harsher, earlier albums. Standing in the middle of their catalog, it is a transitional work that demonstrates their strengths in both irreverent, juvenile attitude, and well thought out song crafting.

This transcends beyond music, it is art. i love every single BHS album/release but Jimi and HtS are simply masterpieces. this was at their pinnacle. BHS is often overlooked, especially for what they did in the "punk" genre, i think they were much better than what came before them and certainly after. this song conjures so many images in my head from different times in my life, and only a few songs can do that

The last real burst of creativity from the Surfers...god I wish I could have seen them live D: fuckin legends