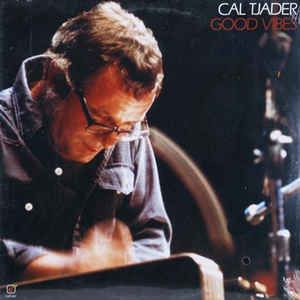 
Cal Tjader (July 16, 1925May 5, 1982) was an American Latin jazz musician, though he also explored various other jazz idioms. Unlike other American jazz musicians who experimented with the music from Cuba, the Caribbean, and Latin America, he never abandoned it, performing it until his death.

Tjader primarily played the vibraphone. He was also accomplished on the drums, bongos, congas, timpani, and the piano. He worked with numerous musicians from several cultures. He is often linked to the development of Latin rock and acid jazz. Although fusing jazz with Latin music is often categorized as "Latin jazz" (or, earlier, "Afro-Cuban jazz"), Tjader's output swung freely between both styles.

Unlike his excursions in the 1960s and his jazz-rock attempts in the 1970s, Tjader's Concord Picante work was largely straight-ahead Latin jazz. Electronic instruments and rock backbeats were dropped, reverting to a more "classic" sound. During the prior decade he'd built up a top-notch crew of young musicians, his best lineup since his Modern Mambo Quintet of the 1950s, with Mark Levine on piano, Roger Glenn on flute, Vince Lateano on drums, Robb Fisher on the bass, and Poncho Sanchez on the congas.

Tjader cut five albums for Concord Picante, the most successful being La Onda Va Bien (1979) (roughly, "The Good Life") which earned a Grammy award in 1980 for Best Latin Recording. That Onda would win an award as best Latin album reveals Tjader's expertise and his ability to cultivate the same in his band. La Onda Va Bien is regarded as a seminal Latin Jazz album.

Just as lifelong performer Tjader was born on tour, he also died on tour. On the road with his band in Manila, he collapsed from a heart attack and died
Poncho Sanchez was there when Cal died.

Poncho was with Cal for seven and a half years, from December 31, 1974 to the end. That is the longest tenure of any Tjader sideman. Lonnie Hewitt also was with Cal for over seven years but it was non concurrent. Two mid period stints: Early 1959-late 1961, mid 1962- mid 1966 and December 31, 1974- June 1976. Peraza had two seperate sixties stints totaling seven years. Concurrently speaking, Rob Fisher is second with six plus years: Early 1976 to end. Al Zulaica also had six plus years 1966-1972. Nobody else has more than five. The average tenure for Tjader sidemen was one to two years.

Although his health was in decline, Tjader's artistry continued to grow and his Concord albums reflect this. Again, to my ears, all his Concord LPs were superb. The tragic fact is that Cal was more in demand at the end of his career than he had been since the Soul Sauce years