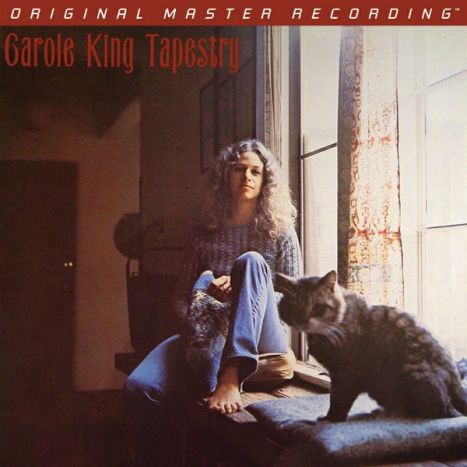 B1 You've Got A Friend
B2 Where You Lead
B3 Will You Still Love Me Tomorrow?
B4 Smackwater Jack
B5 Tapestry
B6 (You Make Me Feel Like) A Natural Woman

"delivers utmost transparency, balance, warmth, intimacy, and perhaps most importantly, feeling. Aware of how many times this iconic work has been re-released, Mobile Fidelity engineers settled for nothing less than the absolute finest sonic presentation possible when mastering Tapestry from the original master tapes"

Carole King was famous as a writer of girl group hits in the 1960s. In 1971, she became more famous. That's the year Tapestry became one of the biggest selling LPs of all time. It's easy to hear why--the music is loose, earthy, L.A. session-pop. King is casual, intimate, and tough; she covers all the emotional ground of the post-liberated woman with ease. She brings adult nuance to "Will You Still Love Me Tomorrow?" and comes up with hits ("It's Too Late", "I Feel the Earth Move") whose white soul realism and maturity put pop hits to shame.

In 1987, Tapestry was chosen by a panel of rock critics and music broadcasters as the #30 rock album of all time. Appropriately enough, King's unparalleled achievement was the highest-placed LP by a female soloist in the survey.

Carole King - So Far Away

this is such a breath of fresh air. When music was good, had soul and meant something