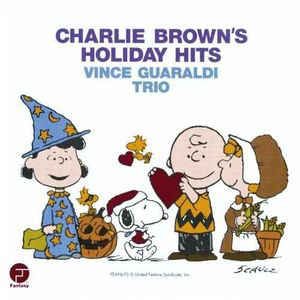 1 to 3 and 9 to 11 produced under license from Lee Mendelson Film Productions. 1 to 6 and 9 to 12 previously unreleased.

Remastered in 1998 at Fantasy Studios, Berkeley.

" Recognizing that the holiday season really begins at Halloween (and, in some quarters, doesn't end until the Super Bowl), Vince Guaraldi and his record company have wisely assembled the hummable themes from various Charlie Brown TV specials. What we have here is the album's ability to communicate the playful irony and loopy, lovable characters that people Charles Schultz's "Peanuts" comic strip every week. Though only one actual Christmas tune is included--"Christmas Time Is Here," in both the vocal and instrumental versions--kids from ages 1 to 92 will still appreciate the "Great Pumpkin Waltz," the "Thanksgiving Theme," oddities such as "Heartburn Waltz" and "Joe Cool," and, of course, the "Charlie Brown Theme." --Martin Keller"( amazon)