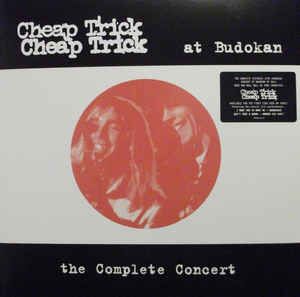 US pressing made in France

Back in 1979, when this record was originally released, double-live albums were all the rage, and for good reason: Kiss, Aerosmith, Peter Frampton, Ted Nugent and Parliament all cut some unforgetable wax of their own in the double-live genre.

But then, Cheap Trick came along with their own live album on a single record that blew all those others out of the water, for its intensity and musical chops. I'll put Robin Zander up against any of the vocalists, Rick Nielsen up against Ace Frehley, Nugent, Michael Hampton or Joe Perry and Bun E. Carlos up against Peter Criss anyday.

Like Kiss, Cheap Trick was one of those bands that sounded better live. The song lineup is a perfect distillation of their unique hard-rock-cum-bugglegum sound: The set opens with "Hello There," a rousing crowd pleaser.

"Come On Come On" and "Lookout" really let the listener know how BIG the boys from Rockford, Ill., were in Japan. These are great songs for their mostly teenage female audience, and the screaming of their fans behind the tracks sounds like it could have been recorded at the Beatles' 1965 concert at Shea Stadium.

The best on this set are in the middle: "Big Eyes," "Need Your Love" -- which have been woven together to give Rick Nielsen a nice long guitar riff, and Robin Zander some reverberating vocals to woo the Japanese girls with -- and their remake of the Fats Domino tune, "Ain't That A Shame."

"I Want You To Want Me" has a harder edge than in the studio version, thankfully played without that tinkling piano.

But, the best in the set is "Surrender," which was recorded before the studio version was released. This is the version radio stations still play, and is full of double-entendre worthy of AC/DC.

Appropriately, it closes with "Goodnight," a reworking of "Hello There" -- nice bookend effect.

"Clock Strikes Ten" is a great last cut on this album, not quite the rock anthem "Rock and Roll All Nite" is, but a signature Cheap Trick track just the same.