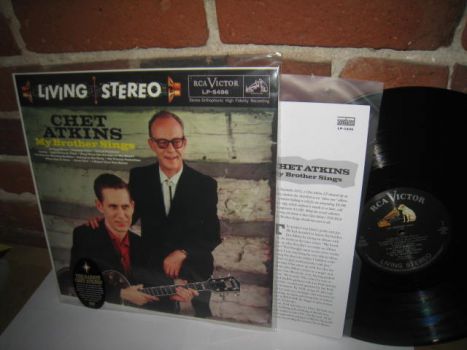 
Never heard of LPM 1932 before? Neither had the seller. Heres the deal. I have never seen this LP before. No one I know has had it or heard of it, the seller confesses. Id say its by far the rarest Chet Atkins record and a pretty neat novelty in top condition. That honesty didnt dissuade potential buyers, who placed 37 bids.

We couldnt find anything about this record that was supposed to have been released in the late 1950s, other than general presumptions that it was unissued. Kinda makes you wonder what the record sounds like, doesnt it?

Okay, I admit I have very little Chet Atkins in my collection, despite my deep respect for his work. But I can't believe how great the sound is on this 1959 Living Stereo LP that never got commercially released until today.

It would have been the first Chet Atkins stereo release had it been released. The thorough liner notes tell the album's story. Recorded in 1958 just after RCA's Nashville studio got upgraded for stereo, the sound is beautiful. Full bass, great crisp high end on Chet's guitar, and a few tunes with an experimental stereo pickup.

Jim Atkins was retired from big band singing, and managing Denver's top radio station at the time of this recording. He sings well, but Atkins guitar fanatics will be delighted that he's only on half of the tracks; the rest are instrumentals; on the other hand, collectors probably have those instrumentals as they were repurposed to other albums.

I highly recommend this, and it's destined to be a record to both demo my stereo system, and my needle drops.


Chet Atkins - Out Of Nowhere

Chet Atkins - I Know That You Know