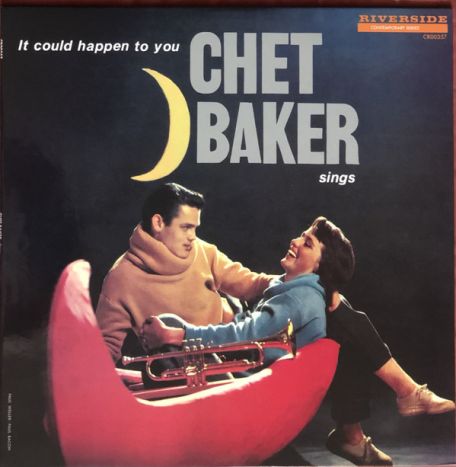 Chet Baker – It Could Happen to You

Label:
Riverside Records – CR00357, Craft Recordings – CR00357
Format:
Vinyl, LP, Album, Reissue, Stereo 180 Gram
Mastered By – Kevin Gray
Country:
US
Released:
2021
Genre:
Jazz
Style:
Cool Jazz
Tracklist
A1 Do It The Hard Way 2:57
A2 I'm Old Fashioned 5:00
A3 You're Driving Me Crazy 2:52
A4 It Could Happen To You 2:48
A5 My Heart Stood Still 3:24
B1 The More I See You 3:01
B2 Everything Happens To Me 5:01
B3 Dancing On The Ceiling 3:05
B4 How Long Has This Been Going On? 4:06
B5 Old Devil Moon 2:54
Credits
Bass – George Morrow, Sam Jones
Drums – "Philly" Joe Jones, Dannie Richmond
Piano – Kenny Drew
Trumpet, Vocals – Chet Baker
Notes
Original released 1958
Barcode and Other Identifiers
Barcode: 888072197534
Label Code: CR00357
Matrix / Runout: (side A): CR 0026-A KPG@CA 33211.2(3)...
Matrix / Runout: (side B): CR00026-B KPG@CA 33211.2(3)...
Classic is the word reserved for recordings like this. Baker's vocal performance here is one of the greatest displays of 'feel' virtuosity you will ever hear in your life. By 'feel' virtuosity, I mean knowing exactly the right tone, dynamics and delivery that best fits the overall mood of the tunes in question. Like Fagen of Steely Dan and other singers of limited means, knowledge of how to sing exactly the right 'feel' into the overall mood rules all.
This is a very nice session with Chet singing, and occasionally playing with a jazz trio, Chet Baker sings his heart out on this magnificent sessionon songs like I'm Old Fashioned and Do It The Hard Way, very nice, romantic, and highly recommended to the most critical jazz and jazz vocal fans
This overall mood created by Kenny Drew, George Morrow, Sam Jones, Phlly Joe Jones and Danny Richmond is breezy 'cool' personified and so laid-back, one more step would make it comatose and yet that step is never taken even once. The tunes groove and swing like crazy in a ridiculously addictive way because no matter how smokin' the band gets, it's always COMPLETELY laid-back, WITHOUT being trivial,sappy or insignificant or god forbid, in the territory of what later came to be called 'smooth jazz.' This is not 'smooth' jazz or even 'Bing Crosby jazz' despite being the suavest of the suave, it is the EPITOME of 'cool' jazz, one of the ultimate fruits of the so-called Miles Davis school, which incorporates street-smarts and attitude into jazz and the reason why Davis' back-up players, from Paul Chambers to Philly Joe Jones to Bill Evans, etc.,
all played with Chet. Davis himself felt that Chet was a good player and a nice enough guy but was personally rather cold to him the few times they met because he felt Chet had stolen a lot of stuff from him, stylewise. Be that as it may, many jazz fans feel that Chet's trumpet playing, besides being the greatest homage to the Miles Davis style there ever was (especially on the classic all instrumental "Chet" album) is also unique enough to be recognized as its own style within the cool-jazz influenced group.
According to the warts-&-all exhaustive biography "The Long Night of Chet Baker," at this point in time, Chet's heroin addiction was still at its relatively early stages. Chet had been pretty much just a heavy marijuana smoker throughout most of the early fifties as more hardcore heroin users like Stan Getz were overdosing in his bathroom and Gerry Mulligan was doing prison time. So here was Chet at his peak, already addicted to heroin but right before heroin started taking control of his life. To illustrate, the author quotes Orrin Keepnews that right around this time Chet and Philly Joe Jones started stealing and selling Fantasy/Riverside albums right from their warehouse across the street in order to pay for their habits.
"It Could Happen to You" works equally well as a great pop or jazz record. The ability of the players and virtuosity and attention to nuance with which they play, not to mention the purity, makes it squarely jazz. But it's also a vocal jazz album of popular 'standard' tunes with only a few trumpet solos in the right spots which, when they come, man do they hit their mark! Sometimes instead of the trumpet solo, Chet sings or scats the trumpet solos in a super-cool swinging manner bordering on the surreal and silly that within this background and setting is pure magic itself. These scats really soar and groove right into laid-back nirvana. Kenny Drew on piano offers here the most exquisitely perfect accompaniment to Chet's boyish-but-rough vocals you will ever hear. Never too sappy, never too harsh, romantic but ever-understated at all times just like Chet himself.
On top of it all, this may be one of the most perfect 'ambient' jazz/pop albums you will ever hear. All the tunes are great, nothing to skip and the dynamics are always mellow, understated and enveloping. You can leave it on 'repeat' all day and never want the perfected understated feel to end. The more you play this album, the better it gets, it completely relaxes at the same time as it challenges and refuses compromise. An exquisite and unique work of art from beginning to end.

All music "The ultra-hip and sophisticated "cool jazz" that Chet Baker (trumpet/vocals) helped define in the early '50s matured rapidly under the tutelage of producer Dick Bock. This can be traced to Baker's earliest sides on Bock's L.A.-based Pacific Jazz label. This album is the result of Baker's first sessions for the independent Riverside label. The Chet Baker Quartet featured on Chet Baker Sings: It Could Happen to You includes Kenny Drew (piano), Sam Jones (bass), and Philly Joe Jones (drums). (Performances by bassist George Morrow and drummer Dannie Richmond are featured on a few cuts.) This results in the successful combination of Baker's fluid and nonchalant West Coast delivery with the tight swinging accuracy of drummer Jones and pianist Drew. Nowhere is this balance better displayed than the opening and closing sides on the original album, "Do It the Hard Way" and "Old Devil Moon," respectively. One immediate distinction between these vocal sides and those recorded earlier in the decade for Pacific Jazz is the lissome quality of Baker's playing and, most notably, his increased capacity as a vocalist. The brilliant song selection certainly doesn't hurt either. This is an essential title in Chet Baker's 30-plus year canon."