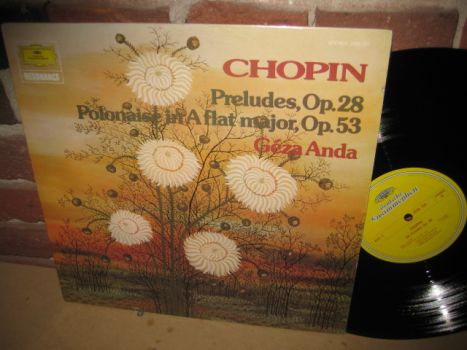 Skip to the beginning of the images gallery
Details
Frederic Chopin - 24 Preludes, Op.28 - Polonaise No 6 in A flat major,Op.53 - Geza Anda (Piano).

Geza Anda (1921-1976) earned the accolade troubadour of the piano from Wilhelm Furtwaengler, after having played Francks Symphonic Variations in Berlin in 1941. The maintenance of a strong singing line in all he played certainly characterized Andas elegant style, a sense of both declamation and polyphony,


Anda drives his Chopin, sometimes losing the plasticity of the line for the symmetry of the arches. But the color-scheme and harmonic variety of Chopins palette Anda preserves with meticulous care,
More Information
Please sign in with your email address or Create an Account.
New Products
Compare Products
Compare
Clear All
You have no items to compare.
My Wish List
Last Added Items
Go to Wish List
You have no items in your wish list.
Vinyl Records Vancouver
Categories
Help
Quick Link
Newsletter