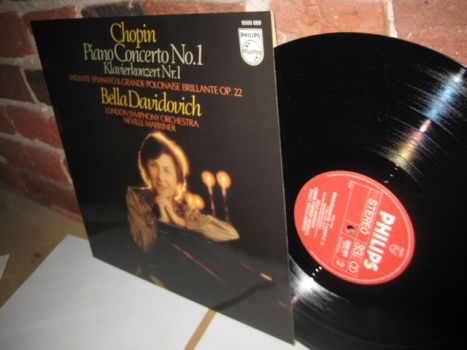 Piano Concerto No.1 in E minor, op.11, composed in 1830. First performance given by Chopin himself on 11 October of that year in Warsaw, during one of his farewell concerts before leaving Poland..

What a beautiful interpretation. I know very little about this pianist and her music but I have to say that I am amazed from her playing..


Davidovich was born in Baku, Azerbaijan, into a family of musicians and began studying piano when she was six. Three years later, she was the soloist for a performance of Beethoven's Piano Concerto No. 1. In 1939, she moved to Moscow to continue her musical education. At the age of 18 she entered the Moscow Conservatory where she studied with Konstantin Igumnov and Yakov Flier. In 1949, she shared the first prize with Halina Czerny-Stefańska at the 4th International Frederick Chopin Piano Competition. This launched her on a very successful career in the Soviet Union and Eastern Europe, in which she appeared with every major Russian conductor and performed as a soloist with the Leningrad Philharmonic Orchestra for 28 consecutive seasons. She also taught at the Moscow Conservatory for sixteen years. Bella Davidovich was one of the Soviet Union's pre-eminent artists as well as one of the few women to be admitted to the inner circle of Russian cultural life. She was married to violinist Julian Sitkovetsky. Their son, Dmitry Sitkovetsky, is a violinist and conductor.

In 1978 she emigrated to the United States, where she became a naturalized citizen. She has taught at the famous Juilliard School in New York City since 1982.

With the spirit of perestroika, she became the first Soviet émigré musician to receive an official invitation from the Soviet agency Goskoncert to perform in her native country. She played concertos, a recital with her son Dmitry Sitkovetsky playing the violin, and chamber music with the Borodin String Quartet to sold-out halls
More Information
Please sign in with your email address or Create an Account.
New Products
Compare Products
Compare
Clear All
You have no items to compare.
My Wish List
Last Added Items
Go to Wish List
You have no items in your wish list.
Vinyl Records Vancouver
Categories
Help
Quick Link
Newsletter