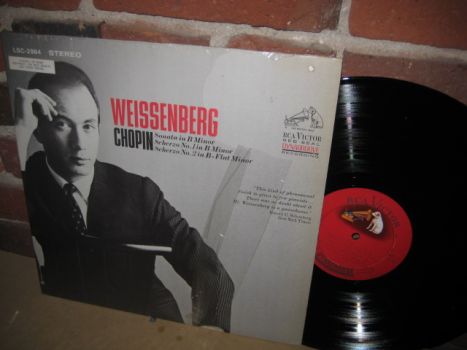 Skip to the beginning of the images gallery
Details
Frédéric Chopin -

He was born in Sofia and had piano lessons from the age of three with Pancho Vladigerov. He gave his first public performance at the age of eight. After escaping to Israel in 1945, where he studied with Leo Kestenberg, he went to the Juilliard School in 1946 to study with Olga Samaroff. He also consulted Artur Schnabel and Wanda Landowska. In 1947 he made his New York debut with the Philadelphia Orchestra under the baton of George Szell playing Rachmaninoff's Piano Concerto No. 3. Between 1956 and 1966 he took an extended sabbatical for the purpose of studying and teaching. He resumed his career in 1966 by giving a recital in Paris; later that year he gave Tchaikovsky's Piano Concerto No. 1 in Berlin under Herbert von Karajan, who called him "one of the best pianists of our time".

Weissenberg is said to possess one of the finest techniques of any pianist in the generation following the great Russian School pianists (Lhevinne, Horowitz, et al.), however, it is claimed that he never uses it for the sole purpose of virtuosity. Pyrotechnics only serve the musical exposition. His recording of the Liszt Sonata of the early 1970s is considered to be one of the most exciting and also lyrical, in a discography with over 100 recordings (Bryce Morrison in "gramophone").

He is also well known for his readings of Schumann, Rachmaninoff, and many works by Frédéric Chopin, including the complete works for piano and orchestra, the piano sonatas nos. 2 & 3, the nocturnes, and the waltzes.

Among his other notable interpretations are those of Johannes Brahms's Piano Concerto No. 1, with Carlo Maria Giulini and Maestro Muti, ("Les Introuvables d'Alexis Weissenberg", 2004), Rachmaninoff's Piano Concerto No. 2 with Herbert von Karajan and the Berlin Philharmonic, and the same composer's Piano Concerto No. 3 with Georges Prêtre and Seiji Ozawa with the Boston Symphony Orchestra (also with Leonard Bernstein and the Orchestre National de France).

He also is a teacher, giving piano master classes all over the world. He has founded the Alexis Weissenberg's Piano Master Class in Engelberg (Switzerland), where he has had as students many pianists of the new generation: Kirill Gerstein, Simon Mulligan, Mehmet Okonsar[1] and Nazzareno Carusi among others.
More Information
Please sign in with your email address or Create an Account.
New Products
Compare Products
Compare
Clear All
You have no items to compare.
My Wish List
Last Added Items
Go to Wish List
You have no items in your wish list.
Vinyl Records Vancouver
Categories
Help
Quick Link
Newsletter