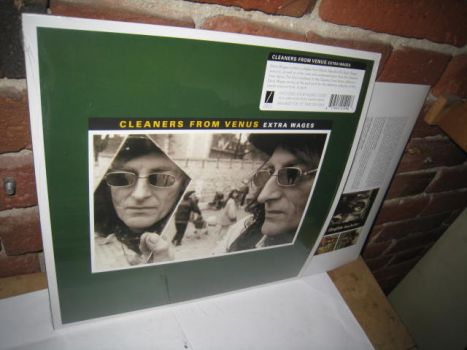 1. It Could Have Been Cheryl
2. The Iceberg And Unicorn
3. The World Strikes One
4. The Princes Of Suburbia
5. Rusty Iron Sun
6. Gatecrashing Oyster Park


This LP contains the remaing outtakes from Newell's 1992 recordings that resulted in "My Back Wages", along with other rare and unreleased music from the Cleaners From Venus. It would be nice and tidy to be able to say that the Cleaners from Venus story ended right here with this rather more than definitive collection of broken or misshapen tracks. The truth of the matter, however is that the story may not quite be over yet... "

For a catch all comparison think of them as an English Guided By Voices. They have the same slap dash approach, the same knack of producing melodies that sound like they should be classics, the same 60s obsession. Where they differ, though, is that Martin Newell and co are a much more pastoral proposition, obsessed with autumn, cornfields, girls and small town melancholy. XTC is probably the nearest they get to English contemporaries.

The first three tracks on this very worthwhile LP yield immediate results. It Could Have Been Cheryl has a skyscraping melody, The Iceberg and Unicorn is pure watery melancholy, The World Strikes One is another example of Newells timeless songwriting and provincial town world view.


The songs here seem to be mostly acoustic, probably demos meant to be recorded in the studio at some point but even in these stripped back versions the classy songwriting shines through.
More Information
Please sign in with your email address or Create an Account.
New Products
Compare Products
Compare
Clear All
You have no items to compare.
My Wish List
Last Added Items
Go to Wish List
You have no items in your wish list.
Vinyl Records Vancouver
Categories
Help
Quick Link
Newsletter