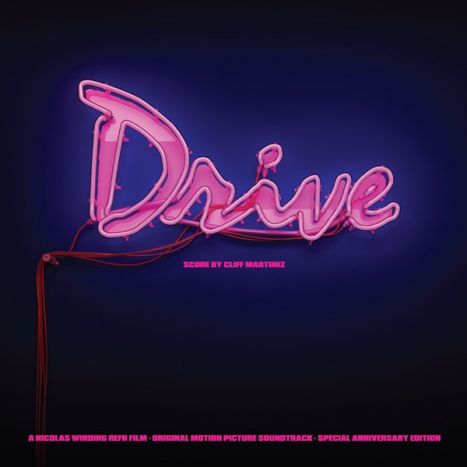 
A Rare Example Of Electronic Tones Working To Perfection With The Cinematography. Martinez Delivers A Masterful Score

Drive is an experience to be had. I waited to see the film before I reviewed the score because I felt like I needed to experience the sound and image of this film together. I'm glad I did. The effect of the score may be lost upon an unreferenced listen, but let me tell you that Cliff Martinez has done something quite amazing here. Drive is a pure adrenaline rush of a film. Nicolas Winding Refn has crafted a supreme thriller. The music of the film is the most important bonding element of this violent and suspenseful tale. The film is filled with stunning imagery and long duration takes. It also features a seamless soundscape between score and song.

Drive has a vintage feel. It feels as if it were made in the 70's but remodeled for modern day. Very much like a beautifully restored vintage car. The character of the driver feels as if he was plucked right out from a spaghetti western. He barely speaks and dons a jacket with a scorpion on the back (very much like El Mariachi's jacket in Desperado). The song choices will be the first thing that the audiences will pay attention to. The songs selected fit the same thematic feel of the movie. They sound like they are 80's hits but are all modern songs with a vivid techno pulse. Cliff Martinez then crafts his stunning score around this universe. The music lacks any graspable structure and is a sonic wash of electronic tones. The way it works in the film is absolutely stunning. I can only describe the music as colorful. There was a point in the film where Ryan Gosling was driving and the sequence was just him driving at night. The shot composition was tight with shallow focus so all you saw was blurs of colors. At that point I felt a rush as the music took over and all you heard were these tones of the night. Cool and crisp, I was able to close my eyes for just a few seconds and see distinct colors as the tones shifted. Martinez also plays the emotions heavy with the relationship between the driver, Irene and Benicio. The score crafts an incredible bubbling tension as well. The way it works with the editing of certain scenes is amazing. Refn is also unafraid to let silence play. A lot of times you will have pockets of pure silence that are broken with a startling sound. The sound design is impeccable and Martinez knows when music is not needed at all. All in all this is a masterful, bold and unique experience.

Drive is a rare example of electronic tones working to perfection with the colors and shot composition of the film. This is as tense as it gets; the score and songs MUST be experienced with the film. Do yourself a favor and see the movie before attempting this listen as it will make it the full experience. Cliff Martinez has done so much with so little here and has composed one of the best scores of the year. This is as untraditional as it gets, but it's oh so good. Damn good.