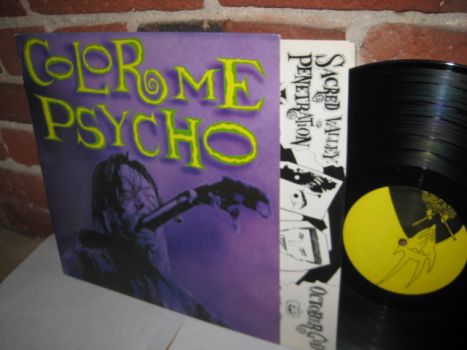 Label: Raging Records
Catalog#: RAGE 002
Format: Vinyl, LP
Record is VG+ VG++ (listen to our copy)
Cover has minor corner wear and one cm fold marks down the left side. (see our picture)


Trash. There I said it. Its one of the essential ingredients in Horror punk. Trash, like the New York Dolls sang about, Trash in the way the Cramps would shout it, and Trash in that overdriven attitude of teen energy that all us old bastards only wish we could recapture.

I have news for you kids, youth is wasted on the young. Speaking of young trash, one Alistair Hexx, before he changed his name to Jackson Phibes was a purveyor of near perfect trash when he fronted the band Color Me Psycho, which last I heard he liked to call Color Me Sucko. Calgary Canadas great fuzz and organ driven garage rock revivalist who while never overtly horror playing the Psychotronic playground of genre fair, bashing out tunes about sex, and weird gods, deadly cars and fear.

Since starting out in the primordial-ooze of the Calgary-based garbagy/garagy Color Me Psycho, entertainer Jackson Phibes has been dishing out macabre-tinged rockin' slop to disbelieving audiences for over 13 years. CMP managed to stay together for 3 years of tyranny and stagnation, releasing a few tapes and one full-length piece o' vinyl (the now collector's item "Pretend I'm your Father" album).

Immediately following the demise of his first ill-fated stab at the small-time, Phibes (who was still toiling under the dubious nom de axe, Aleister Hexxx) set about initiating a head-long dive into the horror-rock ghettos with the Forbidden Dimension."
More Information
Please sign in with your email address or Create an Account.
New Products
Compare Products
Compare
Clear All
You have no items to compare.
My Wish List
Last Added Items
Go to Wish List
You have no items in your wish list.
Vinyl Records Vancouver
Categories
Help
Quick Link
Newsletter