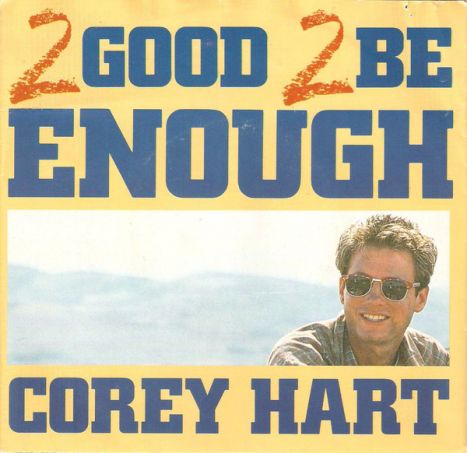 Corey Hart ‎– Too Good To Be Enough

Record is VG++ clean (listen to our copy)

Corey Hart was born in 1962 in Montreal, Quebec. He is best known for his international Top Ten hits “Sunglasses at Night” (#7 Billboard Hot 100) and “Never Surrender” (#3 Billboard Hot 100). Hart is lauded as one of Canada’s most successful singer-songwriters. He’s sold over 16 million records worldwide. On the Billboard Hot 100 Hart scored 9 consecutive Top 40 Hits. Back in Canada he succeeded in charting 30 top 40 singles (including 11 Top 10 singles during his career). Hart is a Grammy Nominated, ASCAP & multiple Juno and ADISQ award winner. He has also written and produced several songs for fellow Quebec recording star Celine Dion.

in 1987 Hart had a #1 hit with a cover of the 1961 Elvis Presley song, “Can’t Help Falling In Love”, from the film Blue Hawaii. Hart also released his third album, Fields Of Fire. In the midst of these releases came a non-album synth-pop single titled “2 Good 2 Be Enough”.