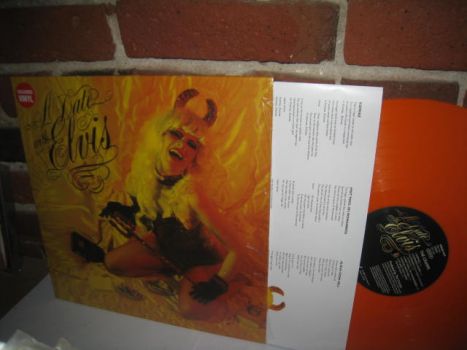 Dedicated to Ricky Nelson, A DATE WITH ELVIS (1986) is the third Cramps studio album, recorded five years after their last, 1981's PSYCHEDELIC JUNGLE (in the interim, the band recorded a number of EPs and a pair of live albums, and extracted themselves from a legal dispute with their old record label). Playing as a three-piece, with the extremely talented Poison Ivy on guitar and bass (as well as singing on a coupleof tracks!), the band turned their most solid studio record.

From the brilliant usage of a preschool choir singing the chorus of "People Ain't No Good" to a crunching cover of "Get Off the Road", the theme song of the 1968 biker exploitation flick, SHE DEVILS ON WHEELS, the record includes a bunch of oughta-be classics. Standouts include the faux-hippie duet of "Kizmiaz", one of the band's several peaks of hyperactive, juvenile sexual obsession; "Hot Pool of Womanneed", featuring lyrics like "As Jacob said to Isaiah / In them biblin' days of yore / Man that babe is the tomata / Oh my Lord I'm longin' for"; and Lux Interior's nearly perfect impression of the King on "It's Just That Song". Chiswick.


Originally released in 1986, as this was their fifth 'actual' record (is that all?). Either way, 'Date With Elvis' showcases some great rockin' psycho-billy for your listening pleasure. Just about every track here kicks ass, like the swinging "The Hot Pearl Snatch", "What's Inside A Girl?", "Can Your Pussy Do The Dog?", "Corn-fed Dames" (forgot all about this superb cut), the boot-stompin' "Chicken" and "Aloha From Hell". As with most Cramps releases, 'Date With Elvis' is most worth repeated spins. Simply a must-have.

"A Date With Elvis" kicks off with the eerie, Suicide-like drone that appeared on 1984's "New Kind of Kick". But then the drums immediately kick off one of The Cramps catchiest, toe-tapping-est numbers in "How Far Can Too Far Go", in which Lux's vocals seem more upfront that ever.

There's some humorous and racy songs in the pounding "Hot Pearl Snatch", twist-friendly "Can Your Pussy Do the Dog" and the play-on-words "Kizmiaz"--a real departure--with it's dreamy, fairy-tale atmosphere and female backup vocals.

The super-fast "Chicken" is Lux in Jerry Lee Lewis soundalike mode; the spritual "(Hot Pool of) Womanneed" is his best Elvis-as-an-evangelist impersonation. "Aloha From Hell" has much in common with Elvis movie melodies like "Viva Las Vegas". There's a twangy ballad called "It's Just That Song" but it doesn't amount to much.

"People Ain't No Good" is straight-ahead rock and roll that features a children's chorus; "Cornfed Dames" has to be their most explosive song ever; the best number is "What's Inside a Girl" which reaches its boiling point at the third verse when those drumsticks start clicking away (Rock-n-roll just doesn't get any better than this).

The Cramps - A Date With Elvis

live on british T.V.circa 1986 the Cramps with new bassist Fur with two songs from their l album "a date with Elvis


The Cramps - What's Inside a Girl? LIVE


The Cramps - Can Your Pussy Do The Dog