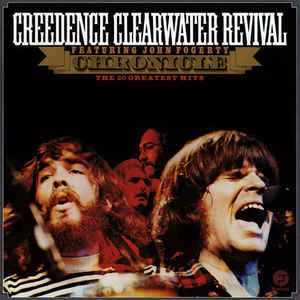 Gatefold Notes:
"Fantasy CCR-2 These records have been coupled to play in sequence on an automatic turntable."
"℗ 1976, Fantasy Records, Tenth and Parker, Berkeley, California 94710"

Media Notes:
"©℗ 1876 Fantasy Records"
Probably a mimic of the original mistake in an early release...

Few bands of the 1960s retained as much a sense of the roots of rock and roll as did Creedence Clearwater Revival. Their music is rife with country, rockabilly, and R&B influences, a combination that produced several hit singles--most of which are present on this collection. These include "I Heard It through the Grapevine," "Lodi," "Up Around the B ," "Who'll Stop the Rain," and of course "Bad Moon Rising." This is an excellent greatest-hits collection, and a perfect introduction to the music of a band that has been enduringly influential.

Creedence Clearwater Revival - I Put A Spell On You


I like CCR for their distinctive, "swamp-rock" sound (even though they're all born and raised in California )
with gritty vocals, and I felt compelled to hear their version of Screamin' Jay Hawkins' classic, which has also been covered by other greats such as Arthur Brown, Pete Townshend and Jeff Beck. You might say that this song put a spell on me.

has anyone noticed that the quality of the music in their live videos is almost as good as their studio recordings. this is because they actually have real talent and are excellent muscians,