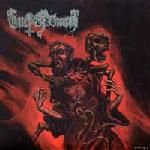 
This approach PERFECTLY suits Cult Of Daath's aesthetic aspirations, varnishing the record with several impenetrable veneers of filth. As with most of their first-wave-cohered-through-a-second-wave-approach brethren, CoD live and die by the riff, and the riffs are A-PLENTY on this affair! The closest parallel one could establish here is to (you guessed it) 'Panzerfaust', another record that resurrected ancient specters through a slightly more modern presentation. The 'Moonfog'-isms are a little hard to neglect here, particularly in many of the Fenriz-esque beats employed by Wargoat Obscurum, though CoD are far from mere replicas- much like Darkthrone did with 'Panzerfaust', CoD revisit the bloodsoaked roots of occult metal, resurrecting ancient spirits through sonic ritual. Admittedly, there are sections where the record gets a little too monotonous for my tastes, but thankfully CoD have enough of a grasp on dynamic songwriting to throw a thrashy interlude into the fray (case in point: Occult Obsession, which seems to meander for far too long, dwelling on riffs that never really go anywhere, and then a VERY COOL Celtic Frost passage cuts through the swathes of fog 03:52 through to OWN YOU). 9 Minute closer Transcending The Great Satan is noteworthy here, meshing strident, insistent bursts of double bass with more elaborate, despairing downtempo sections. There is a VERY ritualistic feel to the ceaseless repetition and cruel simplicity here, all anchored by very tasteful, ominous double bass.

This is, beyond any reasonable doubt, far and away the best thing Cult of Daath have done, and considering how malevolent their past endeavors have been, this is a very positive thing. While first wave revivalism seems to be the en vogue thing nowadays, and CoD might at times appear slightly redundant in light of more accomplished contemporaries like Megiddo, there is real honesty and EVIL within the 48 minutes of this recording. If you live for carrion-infested, NECKWRECKING black metal in its most perverse incarnation, you'd be advised not to miss this.
More Information
Please sign in with your email address or Create an Account.
New Products
Compare Products
Compare
Clear All
You have no items to compare.
My Wish List
Last Added Items
Go to Wish List
You have no items in your wish list.
Vinyl Records Vancouver
Categories
Help
Quick Link
Newsletter