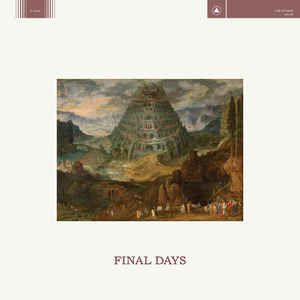 On the vinyl label, the track A2 "Empty Faction" appears as "Cat Piss (White Punk)".

All songs written and recorded at Heaven Street through the dark days and bright nights of 2013 and 2014.

"Final Days, the fourth and most cataclysmic album to date from Brooklyn post-industrial prophet Sean Ragon and his swelling Cult of Youth congregation. Since debuting in 2007 as a solo acoustic mission, Ragon has been gradually adding more members, not to just elaborate upon his neofolk-rooted sound, but to seemingly recruit soldiers for war. But on Final Days, he’s not so much fighting to save the planet as our collective sense of empathy—because without the latter, the former is essentially doomed. From day one, Cult of Youth songs have followed a similar structural trajectory—solitary acoustic strums introduce Ragon’s sonorous croon, before his playing turns incrementally intense and his voice explodes into a self-immolating shriek. Final Days showcases a newly expanded five-piece chamber-punk formation, it proves to be a much gnarlier, nastier record than its predecessor. True to its wide-screened scope, Final Days unfolds like a film told in flashback, with the eerie opening soundscape presenting a desolate, post-apocalyptic scene that the subsequent vocal-driven songs subtly inch us toward. And just as a track like "Dragon Rouge" gradually builds from deceptively idyllic folk-song overture toward a cataclysmic, string-screeching climax, so too does Final Days’ sequence as a whole, frontloading more concentrated blasts of fury to set up the more imposing, expansive set pieces of the album’s second act." (Pitchfork)