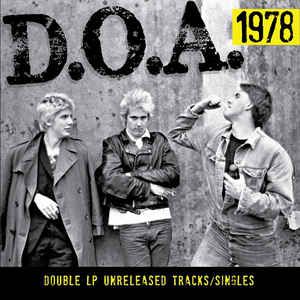 " a 21-track collection of never released demos, rare tracks and early singles from Canada’s punk pioneers. Joey Shithead went deep into the vault and came up with some super exciting and raw punk rock. The album title and art concept is a spike-haired nod of the head to that early, dynamic era ofthe band and to the seven great former members who have since passed on. Their spirit and talent played a huge role into launching the band into worldwide prominence. The two constants on the album are Joey and Chuck Biscuits, who play on every track. From the start of 1978 begins their wild, “I don’t give a shit” approach to punk rock. Now some forty years later one can hear it all, starting with the never-seen-the-light-of-day demo version of “The Enemy”. This demo has a different set of lyrics that speaks to fighting Nazis—strange, what is old is new and vital again. There’s a ton of exciting tracks that range from the never heard before, such as “Bored And Suicidal”, “The Mutant”, “No God No War”, “Rip Dis Joint”, “No Way Out” and “Rent-A-Riot”, to classic early singles like “Fucked Up Ronnie”, “Disco Sucks”, “World War 3”, “The Prisoner” and “13”. Also included are demo versions of “America The Beautiful” and “Liar For Hire” with Biscuits drumming, which are wildly different than the classic versions you hear on War On 45. On this collection are the origins of hardcore and a full blast of D.O.A’s politics and raucous humour."