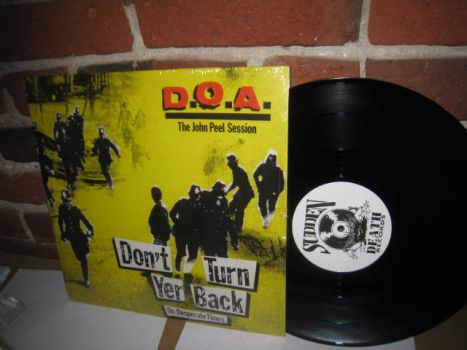 Skip to the beginning of the images gallery
Details
D.O.A. - The John Peel Session - Don't Turn Yer Back


D.O.A.
THE JOHN PEEL SESSION
The Winter Of Discontent
when will it end?

This EP is dedicated to the Miners of the U.K., South Africa, Chile, Poland and everywhere who create wealth and warmth which is being denied them in their Winter of Discontent.

The tracks were recorded and mixed on April 3, 1984 at the BBC studio, London, U.K. and were broadcast on BBC 1 as a John Peel "Session".

"DOA did their first full-on tour of the UK and Europe in 1984. It was gruel-athon: 50 shows in 60 days in 10 different countries. At the end, the band was about to return to Vancouver when they got an offer from the BBC to record a live in the studio session. So, the day before the flight home, Canadas punk pioneers paid a visit to BBC Headquarters in London. Steel Pulse was just finishing up their session before DOA took over the studio and reeled off an explosive four-song set for the UKs top DJ John Peel. During the ten-hour session, the Men of Action recorded General Strike, Race Riot, Season in Hell and Burn It Down. It was an exhilarating end to a groundbreaking tour on which the band that coined the term hardcore showcased what punk rock could be.


Though D.O.A. are currently putting work into a new album called Hard Rain Falling, band leader Joey "Shithead" Keithley is digging deep into the archives again for another vinyl reissue. This time, his Sudden Death Records will be repressing the band's early '80s John Peel Session, Don't Turn Yer Back (On Desperate Times).

A press release notes that the rebooted collection of BBC recordings arrives June 23. It will be the first time it's been given a proper release on vinyl since originally being pressed up by Alternative Tentacles in 1984. Keithley is also giving the set its first-ever standalone LP release. The songs had originally been preserved as a set of bonus tracks on Sudden Death's 2002 re-release of Hardcore '81

It's explained that the session was booked right at the end of a massive tour across Europe and the UK that had the BC punk icons playing 50 shows in 60 days across 10 countries. Recorded at the BBC headquarters in London with legendary radio DJ John Peel, it yielded an "explosive four-song set." The live-off-the-floor cuts include "General Strike," "Race Riot," "Season in Hell" and "Burn It Down."

"The BBC session was f***ing great," Keithley said in a statement. "We were really excited; and then at two minutes to midnight, the studio time was up, a really old BBC janitor unceremoniously kicked us out of the studio, and we were back out on street as usual!"