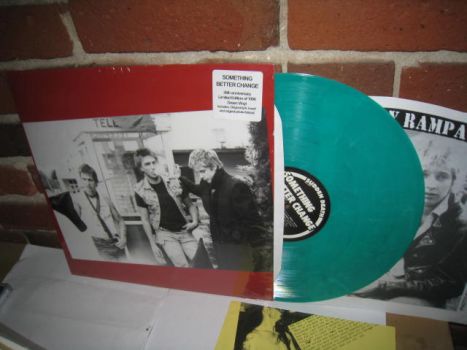 Skip to the beginning of the images gallery
Details
D.O.A. - Something Better Change


Along with the Subhumans, D.O.A. were, and are still, Canada's most powerful punk band! On this album, D.O.A. was: Joey S**thead - Guitar & Vocals, Randy Rampage (also of Canadian speed-metallers Annhilator!) - Bass, Chuck Biscuits (also of Samhain, Black Flag, Social Distortion, Danzig, Circle Jerks and so many others!)- Drums, Dave Gregg - Guitar and Keyboard. Simon Wilde played bass on Woke up Screaming, The Prisoner , Rich Bitch and World War III. This album was originally released on the legendary Vancouver Label Friends Records, Friends Records, which was VERY D.I.Y. cause they re-used surplus record jackets they obtained from other record labels. They printed over the original jackets with black ink, turned them inside out and pasted their covers on the other side. It was so neatly done, most people didnt knew that!

One of THE greatest punk albums ever made, one of the best records period. This original mix is SO superior to the mixes of these songs on Bloodied But Unbowed and Dawning Of a New Error LPs. Almost all songs could be considered "highlights". My personal faves are the Majestic "New Age", "The Enemy", the 2nd versions of "The Prisoner" and "Thirteen" (the single wasn't so great, not on this level anyways); "2+2","Woke Up Screaming" (again, an improvement on the 7" version);"Rich Bitch"...should I just list every song?!! New Age and 2+2, the best.
For those interested in punk, it doesn't get any better than this folks; this is for those who prefer their punk music politically charged (forget Green Day, BLECCH!!); the only bands that dare to deserve mention to D.O.A. in their prime are The Avengers (whose self-titled LP on C.D. Presents is the only one worth getting (even if the White Noise E.P. songs on it are inferior to the original E.P.'s versions), Stiff Little Fingers (Nobody's Heroes period), and maybe Los Olvidados (not political, more for teenage angst). D.O.A. put out a couple great records after this--Hardcore '81 and War On 45, but this is their glory, their greatest hits, so to speak, and is simply amazing. Empowering music to fight this current New Age of Bush-era crap, from the war in Iraq to S.U.V's that all these damn rich breeders own, whatever, this is a perfect antidote to both society at large and the MISERABLE musical non-situation. You like punk, or powerful thrtee or four chord rock with INCREDIBLY forceful vocals (Joey S---head; that's his name, folks), this this album is for you. 6 stars. A punk masterpiece. THIS is "classic" rock in MY book!