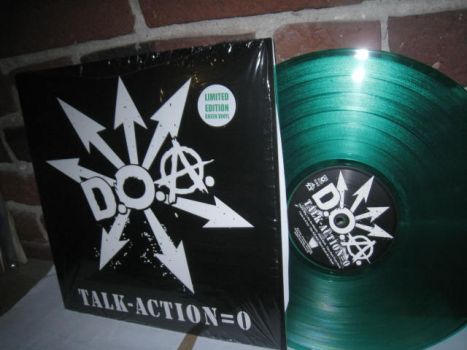 Skip to the beginning of the images gallery
Details
D.O.A. - Talk - Action = 0


Vinyl LP pressing. 2010 album from the Punk Rock veterans. Joe "Shithead" Keithley, Canada's godfather of Punk, has teamed with his cronies Floor Tom Jones (drums) and Dirty Dan Sedan (bass) for one of D.O.A.'s hardest-hitting albums yet. Talk - Action = 0 (not to be confused with the long-out-of-print 1991 live album Talk Minus Action Equals Zero) is the band's lucky 13th studio album and sees them returning to their roots; initial reports have drawn comparisons to D.O.A.'s classic first two albums: Something Better Change and Hardcore '81. There's plenty of what you would expect from the boys--power, politics and humor--with a few unique twists thrown in just to keep the punks on their toes.


"D.O.A. founder/leader Joey "Shithead" Keithley was there at punk's onset, unafraid of anyone, and more than years and 13 albums later, he follows its forgotten command to speak up, offend the blandly comfortable, and follow the credo of this LP's title (not to be confused with D.O.A.'s 1991 live LP of the same name). An opening blast such as "That's Why I'm an Atheist" is the immediate attention grabber that shows how the life-long Vancouverite still boldly lays the lumber (a hockey term), much as a 2010 Chinese tour was shades of D.O.A.'s daring '80s Iron Curtain sojourns beaching Soviet-style state control. And like 2008's surprising Northern Avenger, Talk - Action = 0 is more of the hard rockin' vintage punk and hot-button proto-hardcore D.O.A. began with from 1978-1982. All highlight an intrepid album that hits hard and scores; vim, vigor, vitriol, and compassion will keep us together."