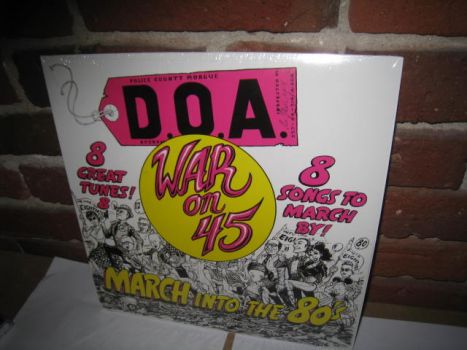 Skip to the beginning of the images gallery
Details
D.O.A. - War On 45

A1 Liar For Hire
A2 I'm Right, You're Wrong
A3 America The Beautiful
A4 Let's Fuck

A great record, Canadian punk pioneers at their best.

the first 4 tracks are the original EP.i fell in love with those songs.fast rockin' tunes with loud vocals.once i lost that EP,i looked forever for it again.this LP release gives me those tracks and more.the audio is awesome.i recommend this.


Originally released in 1982 as an 8 song 12" EP, the D.O.A. classic War On 45 is now being offered as a reissue by Sudden Death in honor of its 30th Anniversary. Includes all eight tracks from the original Faulty Records release, along with ten of the bands best activist songs recorded over the years.