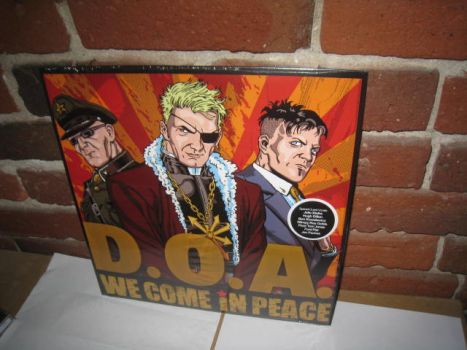 Skip to the beginning of the images gallery
Details
D.O.A. - We Come In Peace


"Do You Wanna" provides some more frantic paced punk rock and Keithley is assisted vocally by Ben Kowalewicz of Billy Talent on this 135-second romp, whilst "Bloodied But Unbowed" slows things down a bit and is a hugely enjoyable song that has me singing along on its first play.

"Bring Out Your Dead" is closer to classic D.O.A. than any of the other tracks on this album in terms ofwell, everything other than the content of the song, which seems to have some kind of zombie element to it. Not something I ever thought would have been the basis for a D.O.A. song, but then again it's damn catchy so I'm not complaining. This track also sounds as if it could have been on 1989's Last Scream of the Missing Neighbors with the whole pace and drive of the track being hugely reminiscent of that album.

The cover of Toxic Reason's "War Hero" is a great reggae version of the original and is as unsettlingly germane today as it was when first released. For some reason this track reminds me of Stiff Little Fingers, although I can't really put my finger on exactly why? The great bass action found in that cover also forms the thick backbone for "We Occupy," the first single off the album, which features a former D.O.A. collaborator, Jello Biafra, for a lyrical gem of a track celebrating one of the few protests in recent years that has gained more diverse support than any other across the globe. It's good to hear Keithley and Biafra together again, as their voices have always seemed to work well together (Last Scream of the Missing Neighbors has always been a favorite of mine and a lot of that is down to the vocal collaboration of the two veterans).

The flipside of the single is up next and "Who The Hell" is a raucous condemnation for the rich and corrupt one percent that are the focus of the Occupy movement across the world and shows that D.O.A. still have it in them to fight the good fight.

"Lost Souls" is an acoustic, catchy song with a brief, warm guitar lead that highlights the variety on this album, and also shows that it's not all about ranting and railing against the system. "Man With No Name" has a spaghetti western feel to it, which it should due to its title, and that goes for the lyrics too, which includes "a fistful of dollars" to add to the Clint Eastwood references.

Next up is a slight curveball with D.O.A. covering "Revolution" by the Beatles and in doing so putting their own inimitable stamp on the song. I'm not a big fan of the Fab Four but this Tasty Trio do well in making this song much more than listenable with an infectiousness which has me getting quite jiggy!

D.O.A. - Walk Through This World