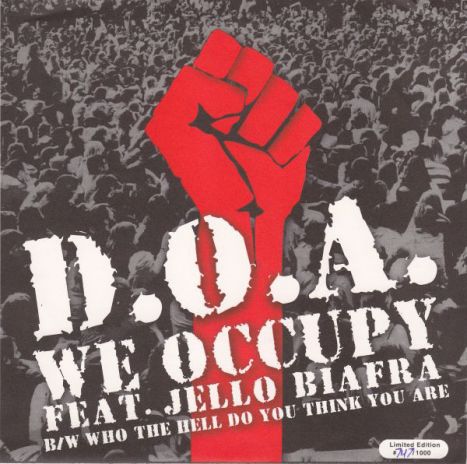 B Who The Hell Do You Think You Are


The most interesting thing about "We Occupy" is the approach that Joey Keithley of D.O.A. and Jello Biafra take. Of course, both scowl at corporate abuses and decry the current economic situation. Those territories are nothing new for either man, but most interestingly, both add a seldom seen element to their own music and punk in general. Instead of focusing on the negatives and dwelling in doom, the pair craft a darn-right upbeat song. By picking a tune that both borrows from major chords and even dips into ska--yes, that's right ska--the pair create a victory song, or failing that, one designed to rally the troops. The decision is quite skillful in that it's inviting to those outside the political and music scene, as well as energizing. By re-charging those in the Occupy movement, Keithley and Biafra encourage those involved to keep moving forward because for once, they might actually be winning the battle.

"Who the Hell Do You Think You Are," the flip-side (which is just D.O.A.), is taken from the stage production of Hardcore Logo: Live. But, in contrast toothermore well known plays about punk, the music here actually is three chord punk bashing. Similar to "We Occupy," even though the lyrics deal with overcoming odds and unequal treatment, the tone is upbeat, and inspires one to fight against resistance instead of just screaming at it.

Just as the music itself seems meant to inspire, it's equally inspiring that some of punk's most politically positive music is coming from a pair with a collective 70 years in punk between them.