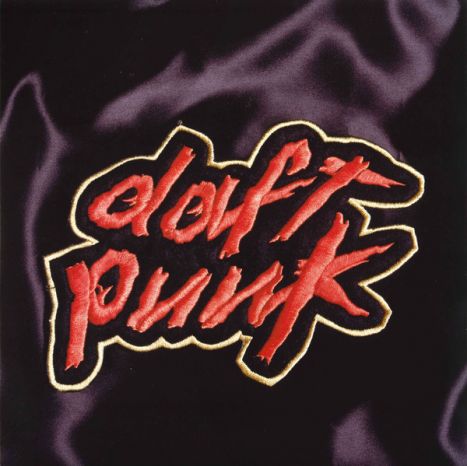 Mixed and recorded @ Daft House, in Paris, France.
Mastered [...] at The Exchange, in London.

( Pitchfork) " While attending a rave in Paris, Bangalter and Homem-Christo had a chance encounter with Glasgow DJ/producer Stuart McMillan, the co-founder of the Soma Recordings dance label; like any aspiring musicians would, they gave him a demo tape of early Daft Punk music. The following year Soma released Daft Punk’s debut single “The New Wave,” a booming and acid-tinged instrumental that would later evolve into Homework cut “Alive.”

A follow-up, “Da Funk” b/w “Rollin’ & Scratchin’,” hit shops in 1995; according to a Muzik profile two years later, its initial 2,000-platter pressing was “virtually ignored” until rave-electronica bridge-gap veterans the Chemical Brothers started airing out its A-side during DJ sets. A major-label bidding war ensued, with Virgin as the victor which re-released “Da Funk” as a proper single in 1996 with non-Homework track “Musique” as its B-side. During this time, Bangalter and Homem-Christo casually worked on the 16 tunes that would make up Homework in the former’s bedroom, utilizing what The Guardian’s Ben Osborne referred to in 2001 as “low technology equipment”—two sequencers, a smattering of samplers, synths, drum machines, and effects, with an IOMEGA zip drive rounding out their setup.

Bangalter and Homem-Christo’s work ethic while assembling the bulk of Homework was of the type that makes sloths appear highly efficient by comparison: no more than eight hours a week, over the course of five months. “We have not spent much time on Homework,” Bangalter casually bragged to POP. “The main thing is that it sounds good… We have no need to make music every day.” The songs were crafted with the intention of being released as singles (“We do not really want to make albums,” Bangalter claimed in the same interview), Homework’s eventual sequencing a literal afterthought after the pair realized they had enough material to evenly fill four sides of two vinyl platters. “Balance,” the pair said in unison when asked about Homework’s format-specific sequencing in Dance Music Authority following the album’s release. “It is done for balance.”

Indeed, Homework is practically built to be consumed in side-long chunks; taking the album in at a single 75-minute listen can feel like running a 5K right after eating an entire pizza. Its A-side kicks off with the patient build of “Daftendirekt”—itself a live-recording excerpt of introductory music used during a Daft Punk set at 1995’s I Love Techno festival in Ghent—and concludes with the euphoric uplift of “Phoenix”; the B-side opens with the literal oceanic washes of “Fresh” before stretching its legs with the loopy, Gershon Kingsley-interpolating “Around the World” and the screeching fist-pump anthem “Rollin’ & Scratchin’.” The third side keeps things light with the flashy, instructional “Teachers” before getting truly twisted on “Rock’n Roll,” and the fourth side takes a few rubbery detours before landing on the full-bodied “Alive”—the thicker and meaner final form of “The New Wave”—and, quixotically, a slight and rewound “Da Funk” return, aptly titled “Funk Ad.”

Bangalter explained to POP that the title of Homework carries a few meanings: “You always do homework in the bedroom,” he stated, referencing the album’s homespun origins before elaborating on the didactic exercise that creating the album represented: “We see it as a training for our upcoming discs. We would as well have been able to call it Lesson or Learning.” That instructional nature is reflexive when it comes to listeners’ presumptive relationship with the album, as Homework practically represents a how-to for understanding and listening to house music.

Nearly every track opens with a single sonic element—more often than not, that steady 4/4 rhythm inextricably tied to house music—adding every successive element of the track patiently, like a played-in-reverse YouTube video showcasing someone taking apart a gadget to see what’s inside. Such a pedagogic approach can have its pitfalls; there’s always a risk of coming across as too rigid, and Daft Punk arguably fell victim to such dull, fussy didacticism later in their careers. But they sidestep such follies on Homework by way of the purely pleasurable music they carefully assembled, piece-by-piece, for whoever was listening.

Under the umbrella of house music, Homework incorporates a variety of sounds snatched from various musical subgenres—G-funk’s pleasing whine, the cut-up vocal-sample style of proto-UK garage made popular by frequent Daft Punk collaborator Todd Edwards, disco’s delicious synths and glittery sweep—to craft a true musical travelogue that also hinted at the widescreen sonic scope they’d take later in their careers. Above all, the album represents a love letter to black American pop music that’s reverberated through Daft Punk’s career to date—from Janet Jackson’s sample of “Daftendirekt” on her 2008 Discipline track “So Much Betta” to Will.i.am’s failed attempt to remix “Around the World” the year previous, as well as the duo’s continued collaborations with artists ranging from Pharrell to Kanye West and the Weeknd.

The spirit of house music’s Midwestern originators is also literally and musically invoked throughout. Over the winding house-party groove of “Teachers,” Daft Punk pay homage to their formative influences, ranging from George Clinton and Dr. Dre to Black house and techno pioneers like Lil Louis, DJ Slugo, and Parris Mitchell—and in a meta twist, the song’s structure itself is a literal homage to Mitchell’s 1995 Dance Mania! single “Ghetto Shout Out,” an interpolation clearly telegraphed in the middle of Daft Punk’s astounding contribution to BBC’s Essential Mix series in 1997.

Alongside Daft Punk’s preoccupations with American popular music, Homework also carries a very specific and politically pointed evocation of their native Paris in “Revolution 909,” the fourth and final single released from Homework that doubled as a critique of anti-rave measures taken by the French government after Jacques Chirac assumed power in 1995. “I don’t think it’s the music they’re after—it’s the parties,” Homem-Christo told Dance Music Authority, with Bangalter adding, “They pretend [the issue is] drugs, but I don’t think it’s the only thing. There’s drugs everywhere, but they probably wouldn’t have a problem if the same thing was going on at a rock concert, because that’s what they understand. They don’t understand this music which is really violent and repetitive, which is house; they consider it dumb and stupid.”

It’s tempting, too, to tie a connective thread between Homework and the brash sounds that proliferated during the peak heyday of the financial descriptor-cum-music genre known as EDM; close your eyes while listening to “Alive”’s big-tent sweep and try not to imagine the tune destroying a festival crowd. But for all of Homework’s aggressive charms, it’s also retained a homespun intimacy in comparison to how positively widescreen Daft Punk’s music became afterwards. “We focus on the illusion because giving away how it’s done instantly shuts down the sense of excitement and innocence,” Bangalter told Pitchfork in 2013, and the fact that two Beach Boys fans fiddling around in their bedroom could conceive of something so generously in-your-face and playful as Homework might still stand as Daft Punk’s greatest illusion yet."