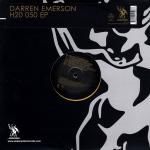 Tracklisting:
A1 Chicago Mousse
A2 Beats In The Box
B1 Detroit Music People
B2 Saturday Night

Ex Underworld star Darren Emerson announced details of his 5oth release on his independent label Underwater, which is to be a 4 track solo EP dubbed H2O 050. The label is also re-issuing their first 9 releases including T Worlds Anthem and Meekers 1996 club hit Save Me.

Chatting to Skrufff several years ago, Darren outlined his hands-on approach to track selection. The main thing was my ears, ie going out and finding some good music, he explained.

Lots of the people Im releasing records with are people Ive met from travelling around with, I met Gus Gus, for example, in 1994. They did my first ever Underwater release as T World back then; before theyd even formed Gus Gus. Everything helps, so being a DJ travelling around the world helps you to e an A&R man because you meet all these great DJs, all into making music.

He also emphasised the importance of pleasure, declaring Ive tried to keep Underwater as much fun as possible, thats what its mainly about. Sometimes you get stressed out by business matters but theres no reason to really. Its got to be about fun, in essence. Youve got to enjoy what youre doing, you only live once.

He also said since starting Underwater that hes let his hair down more behind the decks. I was out in Berlin DJing with Tim (Deluxe) at the Love Parade a couple of years ago and Fergie, the new breed Radio 1 DJ, made me take my top off. Jon Carter and Tim Deluxe also had to take theirs off so all four of us had our shirts off, he recalled.


Ive never taken my top off in a club before, in my life. It was good fun though. Most importantly, I was smiling, and I wasnt smiling towards the end of Underworld, things had to change. Ive got my freedom again.
More Information
Please sign in with your email address or Create an Account.
New Products
Compare Products
Compare
Clear All
You have no items to compare.
My Wish List
Last Added Items
Go to Wish List
You have no items in your wish list.
Vinyl Records Vancouver
Categories
Help
Quick Link
Newsletter