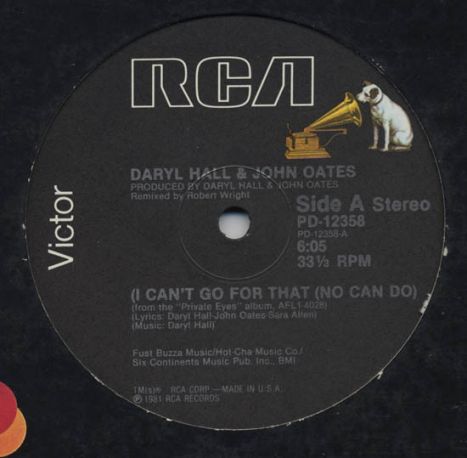 The side A title on the label is incorrectly prefixed with a bracket : (I Can't Go For That (No Can Do)

The intro is frigging unbelievable!

Fact: Michael Jackson admitted to Daryl that he stole the beat from this song for Billy Jean.

I cant believe this song is 38 years old and sound like it could have came out today.
Reached #1 on the Hot 100 Jan 30 1982. It also reached #1 on the dance chart, the R&B chart, and the radio airplay charts. An incredible achievement for not just Hall and Oates, but, for ANY artist or group!

I once read somewhere that this is the most sampled song in history!