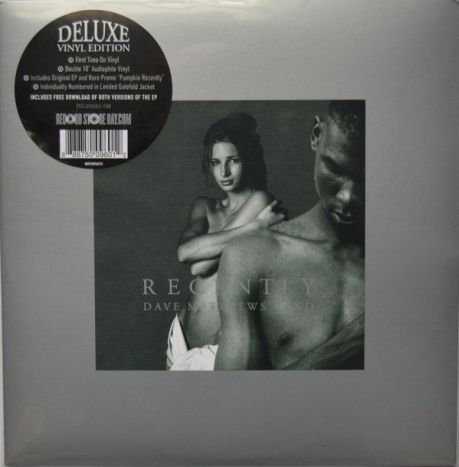 
B1 All Along The Watchtower
recorded live at Trax, Charlottesville, Virginia, February 22, 1994
B2 Halloween

All Along The Watchtower and Halloween recorded live at Trax, Charlottesville, Virginia, February 22, 1994.

All Along the Watchtower has become a favorite at live concerts as a finale or encore. Holloween shows the dynamic contrast of daves songs, providing a harsh edge that proves completely different from the mellow tones and chords of the title track.


Overall, Recently has proven to be a great transition

The EP gives the full gamut of Dave's amazing voice and sound. I reccommend Recently for any dave listener, but especially the true fans who really appreciate his originality and outstanding capabilities as a musician and performer.


This little EP is a gem! All tracks are great, several of them truly oustanding. The entire album is recorded live, but the band sounds much tighter than they did on their previous effort, Remember Two Things. I remember purchasing this at my first DMB concert and being truly floored by the violent power and intensity of "Halloween"... this song will scare you. And you will love it! Equally rocking is their cover of Dylan's classic tune "All Along The Watchtower."


Dave's growls will send you looking for a mosh pit, and Leroi's first breathy then shrieking tenor sax solo seems too good to be improvised. These heavy hitters are perfectly complimented by beautiful acoustic renditions of Nancies and Warehouse, two of the band's greatest songs (featuring Dave on vocals and rhythm guitar and Tim Reynolds playing leads).


First but not least is "Recently", which is the same version as the Remember Two Things track but about three minutes shorter. Though jamming is one of the things Dave Matthews Band does best, this song works better as a bouncy 4 minute ditty rather than an awkward jam that doesn't lead very far into the realms of emotion. This album is a must have for any Dave Matthews fan, casual or obsessive.