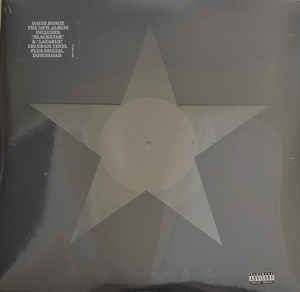 
Blackstar is a jazz influenced art rock and experimental rock album. According to producer Tony Visconti, it was inspired by rapper Kendrick Lamar with his 2015 album To Pimp a Butterfly, with electronic duo Boards of Canada and experimental hip-hop trio Death Grips also being cited as influences. Visconti also said that Bowie had planned for it to be his swan song or "parting gift" for his fans before his death, which took place two days after the album's release. As such both Billboard and CNN noted that Bowie's lyrics seem to revolve around his impending death, with CNN noting that the album "reveals a man who appears to be grappling with his own mortality".

Rolling Stone critic David Fricke described the album as "a ricochet of textural eccentricity and pictorial-shrapnel writing".Andy Gill of The Independent regarded the record as "the most extreme album of his [Bowie's] entire career", stating that "Blackstar is as far as he's strayed from pop." Reviewing for Q magazine, Tom Doyle wrote "Blackstar is a more concise statement than The Next Day and a far, far more intriguing one." In a favourable review for Exclaim!, Michael Rancic wrote that Blackstar is "a defining statement from someone who isn't interested in living in the past, but rather, for the first time in a while, waiting for everyone else to catch up".


The New York Times described the album as "at once emotive and cryptic, structured and spontaneous and, above all, willful, refusing to cater to the expectations of radio stations or fans".Pitchfork's review of Blackstar was written on the day of the album's release, two days before Bowie's death, and concluded with the line "This tortured immortality is no gimmick: Bowie will live on long after the man has died. For now, though, hes making the most of his latest reawakening, adding to the myth while the myth is his to hold."

1. Blackstar: The ominous and gorgeous epic title track which featured one of the creepiest music videos since Marilyn Mansons early work. At nearly 10 minutes long, it would seem like this would be a struggle to repeatedly listen to all the way through. Yet it is such a cinematic musical statement that each listen of this juggernaut is a true experience. It's hard to describe how amazing this song is. The instrumentation and jazz aspects mixed with moments of electronic and even a poppy bridge section all work so perfectly. Bowies vocals will haunt your thoughts at night in the best way possible. I had the subliminal line "I'm a Blackstar, I'm a Blackstar" stuck in my head for the longest time. Masterpiece introduction song. 10/10

2. Tis A Pity She Was A Whore: Gotta love the title. The song rocks off right away with punky drums and jazz saxophone before Bowies crooning vocals turn it into a hectic pop song with urgency in its tone. The song is all over the place with its instrumentation and I love it. There is a twinkle to the song that you'll have to hear to understand. The lyrics are very surreal and almost humorous when looked at from a certain perspective. It's probably the messiest and loudest pop rock song I've heard. 9.5/10

3. Lazarus: Though I love the title song, this is the song that really solidified my decision to buy this album. The bass. The saxophone riff. The scratchy industrial guitar riff. The laid back vocals in the verses. The voice of pain in the bridge section. The saxophone solo. This album really has amazing saxophone moments. This is the type of song to make love to on a Blackstar moon. It's such a beautiful song. Thats that. One of my favorites of all time from any artist. 11/10

4. Sue(Or In A Season Of Crime): Another urgent sounding song. Quick drums with a mix of rocking guitars and more awesome sax action. Surreal lyrics that really help paint pictures in your head. The time signatures are nonexistent almost, giving this an organized mess of greatness in music form. 9.5/10

5. Girl Loves Me: This song almost has a playful tone. The lyrics are explicit in such a classy way. The chorus is hauntingly catchy in similar vein to the title track. The instrumentation toward the end gets dreamy. I can't get the line "Where The F*** Did Monday Go?" out of my skull. Love it. 10/10

6. Dollar Days: This is an utterly beautiful ballad. The verses have an almost Beatles-esque tone. Of course there is another great sax solo. A great song for trying to move on from someone or something. Let this song haunt and help you through tough times. The electronic ending leads into the next song nicely. 10/10

7. I Can't Give Everything: This is arguably the most pop sounding song on the album. It's so uplifting in its sound, yet the lyrics are so sad. Bowies voice hits certain notes that will tug at your heartstrings. Oh those sax moments and the strings sections. This might be my favorite song on the album, even more than Lazarus. Everything works more than perfectly in this song. It closes the album with this finality that really makes me feel like I'm saying bye to someone I wish wouldn't leave with each listen. This shows his ability to write top infectious tunes, yet he still chose to release the controversial title track as the lead single. 11/10

Some will call this an Art Rock album. Experimental Rock. Jazz Rock. I don't think this album is classifiable under any one genre. Yet it is so consistent it isn't really all over the place in its sound either. I truly think David Bowie created a new sound with this album. Not only did he reinvent himself once again, but he seems to have reinvented rock music altogether with this. Many will not like this album. But many many more will love it. It is his best album in my opinion. Yes, I know many will disagree and tell me about all his previous masterpieces. Well I still like this the best and it just keeps growing on me more and more. What a great way to start 2016 with such a lavish and refreshing musical masterpiece. People will dissect this album lyrically and musically for years. Musicians will try but fail to emulate this albums sound. Expect to see this on 'greatest' lists for the rest of time. Future people, am I right?