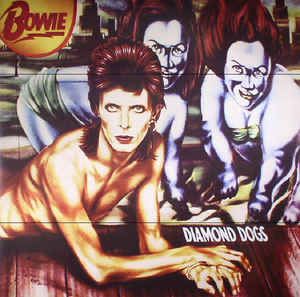 The apocalyptic 1984 album. David had wanted to make a theatrical production of 1984, but the Orwell estate denied the rights (as they had done to others). Diamond Dogs is the remnants of the work done for the production.
The cover art on the original album has a half dog, half Bowie figure painted by Guy Peellaert. This was according to David, a visibly obvious "male dog". RCA didn't like that, and the offending parts were airbrushed out of the release art. History has a way of repeating itself, as a similar controversy arose over the Tin Machine II cover.

The record was Bowie's glam swansong; according to author David Buckley, "In the sort of move which would come to define his career, Bowie jumped the glam-rock ship just in time, before it drifted into a blank parody of itself". Though it made #1 in the UK charts and #5 in the US, Diamond Dogs has been criticised as rough in sound and pretentious in theme. However, Bowie's raw guitar style and vision of urban chaos, scavenging children and nihilistic lovers ("We'll buy some drugs and watch a band / And jump in the river holding hands") has also been credited with anticipating the punk revolution that would take place in the following years.