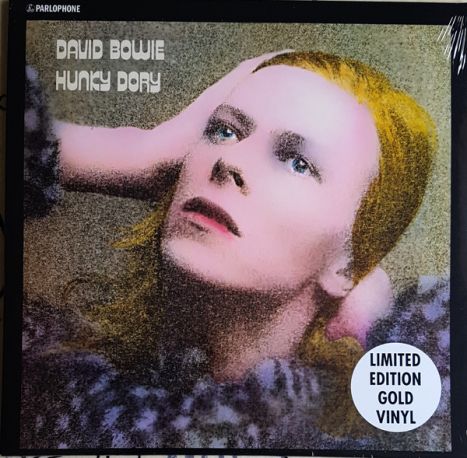 David Bowie is arguably one of the greatest solo artists of all time and his unique alternative style (notice the omission of the word 'pop') is timeless and has deservedly won him loads of fans from generation to generation. Bowie has changed his style from album to album and has produced music in loads of different styles whilst still maintaining his distinctive sound. 'Hunky Dory', Bowie's fourth studio album, released in 1971 is one of the greatest chapters in his career and is definitely one of his most powerful releases.

'Hunky Dory' is the second album in what I would describe as Bowie's classic run of five albums from 'Man Who Sold the World' to 'Diamond Dogs' when he was at his very best. 'Hunky Dory' though is one of his most unique releases. Bowie was not yet into his famous Ziggy Stardust glam rock period but neither is this album as strongly guitar based as its predecessor 'Man Who Sold the World'. 'Hunky Dory' instead is much more acoustic based with lots of piano thrown in but most of all is an album of unbelievable songwriting - songs don't come much better than those on this album.
The album is really well structured as well - each side of the original LP has happy/upbeat songs for the most part but finishes off with a darker, emotive and more powerful song ('Quicksand' and 'Bewlay Brothers'). Bowie's backing group are also excellent on this album.

Rick Wakeman's jazzy piano playing is there practically throughout and really characterises the album. Mick Ronson plays some great guitar solos on the album especially in 'Life on Mars'. Bowie's accomplished and often overlooked saxophone playing is also top notch on this album.

Even though this masterpiece yielded a fair-share of singles, this album is not pop in my opinion but instead is a great serving of alternative, extremely listenable music. 'Changes', one of Bowie's well known songs starts the album. An excellent song, its got a classic chorus with loads of piano play. 'oh You Pretty Things' is a great follow up - brilliant for a sing along with another catchy chorus. It runs very cleverly into 'Eight Line Poem' which is a more reflective songs with somem rather bluesy guitar playing from Mick Ronson.

'Life On Mars?' is next up and this one truly one of Bowie's great songs. The lyrics are some of the best I've heard and Mick Ronson's closing solo is out of this world - listen out for the phone ringing at the end of the track! 'Kooks' is an upbeat acoustic track which Bowie wrote for his son, Zowie Bowie ( now known as Duncan Jones )

Then we come to 'Quicksand', in my opinion the best track on the album. Its got an amazingly calming start before building into a powerful, heartfelt song - the chorus is really moving. A song about losing direction in life, this is one of Bowie's greatest songs.

What was side two of the LP kicks off with a happy sing along 'Fill Your Heart', a great track, although it is the weakest track on this great album - ironically Bowie didn't write this one! 'Andy Warhol' follows this; this strong acoustic jam is excellent. The goofing around in the studio at the start is a hillarious, where Bowie keeps correcting the sound engineer's pronunciation of 'Warhol'. 'Song For Bob Dylan' is a tribute to one of Bowie's great influences and is followed by 'Queen Bitch', the most rocking track on the album, Ronson's guitar work on this track is first rate. 'The Bewlay Brothers' is an unbelievably potent finish to the album. I'm amazed how many reviewers of this album overlook the greatness of this track. I've never heard a track like it. It's mostly acoustic based and is Bowie's telling story of his own brother's lifelong mental troubles. The warped sounding voice at the end of the album is really freaky and it makes your blood run cold but its a remarkable finish to an amazing album.

The 'Hunky Dory' album captures David Bowie on one of the high points of his career. I'm not sure if I'd call it his best album but its up there with his finest efforts and this album is sure to stand the test of time. I'd recommend this album to anyone who likes a unique alternative style of music or to any fan of David Bowie, although there isn't such such a thing as a Bowie fan who doesn't own this masterpiece!

Musical biographer David Buckley said of Hunky Dory, "Its almost easy-listening status and conventional musical sensibility has detracted from the fact that, lyrically, this record lays down the blueprint for Bowie's future career." The opening track, "Changes", focused on the compulsive nature of artistic reinvention ("Strange fascination, fascinating me / Changes are taking the pace I'm going through") and distancing oneself from the rock mainstream ("Look out, you rock 'n' rollers"). However, the composer also took time to pay tribute to his influences with the tracks "Song for Bob Dylan", "Andy Warhol" and the Velvet Underground inspired "Queen Bitch".

David Bowie - Life on Mars
Such emotion and power

A very subtle Bowie in dialogue with the Self, but in reality a solipsistic monologue: questions without rhetorical answers, chronicle of thoughts (ordered and at the same time crowded), sublime and sweet melody, contrasting the intrinsic challenge between light and darkness for noting how mankind can only sink in quicksand, miserably despite doctrines by eloquent answers. But is precisely this the stylistic and purest key of DB: provoke the listener.