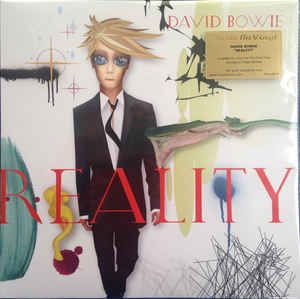 2003...Tony Visconti, has returned, framing Bowie's muscular efforts in ever more ambitious and far-ranging productions that paradoxically echo both Bowie's modern Manhattan roots and his 60's-70's musical prime (an era during which Visconti was often a key collaborator).

Be they oblique, if cutting commentaries on current geo-politics (the Low/Heroes-era evoking "New Killer Star," "Fall Dog Bombs the Moon" and "Looking For Water"), surprising cover choices (Jonathan Richman's "Pablo Picasso" all dizzy and beefed-up; a suitably grand, Wall-of-Sound recreation of Ronnie Spector's obscure, George Harrison-penned "Try Some, Buy Some") or more personal concerns (the vaguely Incan "Days"; the rhythmic Low-isms of "Never Get Old"), Bowie's work here is powered by a renewed sense of dramatic focus and musical purpose that's refreshingly free of the shackles of fashion and self-imposed reinvention. It's true you can't go home again; but damned if Bowie hasn't found his most compelling music in decades trying


NEW KILLER STAR" starts the album with a big bang. Bowie is hooky and edgey all at once! Then he covers "PABLO PICASSO" which some may remember from the film REPO MAN. The album continues in a very strong way, and I find it hard to describe. BOWIE has always been about art rock, and combining many elements not unlike a painter who is using sound as his landscape.

He changes with every album, but at the core is a strong voice and an impeccable poet. The last song on this outing is called BRING ME THE DISCO KING. It's probably a dig at the music that became pop in the 70s that killed his own art rock/glam revolution. This LP is produced along with long time collaborator Tony Visconti. It combines jazz with techno - sort of TONIGHT meets EARTHLING if you can imagine.