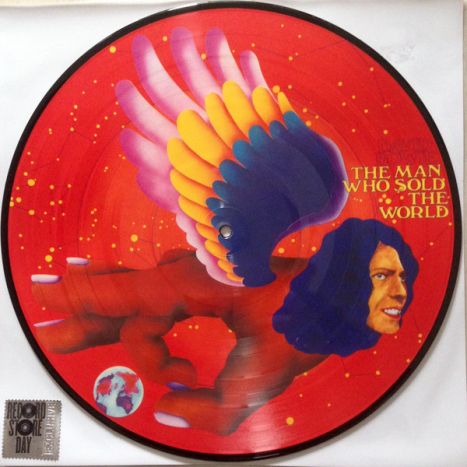 David Bowie ‎– The Man Who Sold The World

Note that apart from the RSD seal on the cover, this release does not have the Mercury logo on the disc unlike the 2004 counterfeit The Man Who Sold The World.

In November 1970, David Bowie released his 3rd studio album and the promise that showed on the previous year's release was brought to fullfillment on 'The Man Who Sold the World'. Tales of madness, the occult, science fiction, maniac Vietnam vets and a race of superhumans fill this bizarre masterpiece of sonic indulgence. Some have commented on this record being David's heavy metal piece and in some parts the guitars are very heavy for 1970 (excepting of course Zep, Purple and the Sabs), but in many ways it is typical early Bowie record, especially lyrically.

The Spiders from Mars make their debut here (with producer Tony Visconti handling the bass chores). Mick Ronson was the actual session leader on these recordings as newlywed Bowie was "preoccupied". Maybe that was the reason for the overabundance of heavy rock but much of Bowie's later work would be heavy as well. Favorites include the epic "Width of a Circle", an alltime favorite of mine which incorporates many of Bowie's early influences including legendary occultist Aleister Crowley.

"All the Madmen" which explores the nature of insanity and touches on David's own troubled psyche while sympathizing with the plight of his half brother Terry. "Savoir Machine" and "Circle" explore the nature of false leadership and gods ("You can't stake your lives..."). "Running Gun Blues" explores the psychosis of war and its impact on soldiers who can't shut it down while back home.

Both "After All" and "The Supermen" explore the ideas of Nietzsche and possibly Lovecraft describing a race aliens who resemble humans but are superior. Many of these will continue in future albums, especially 'Ziggy'. The most famous song on an album of non-hits is undoubtably the title track and it is a brilliant piece of work which stands up to the best of Bowie. A young man in a fragile state of mind? A blissfully ignorant hippie youth? A genius flaunting what was exceptable in rock music? Probably a little of all three which would show its first full bloom on this strange, troubling but brilliant record.