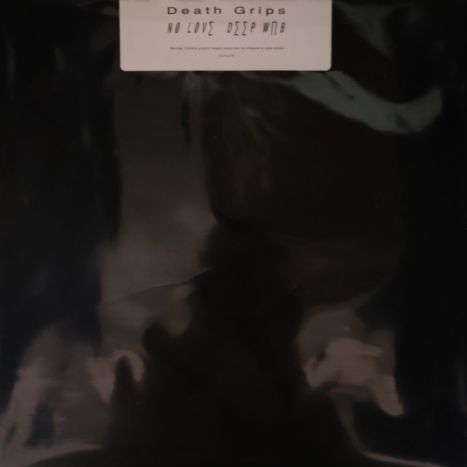 Harvest reissue. Album's original picture sleeve is housed inside a black glossy plastic outer sleeve with a warning about its explicit nature. Comes with insert.
Unlike the original Harvest pressing, the explicit record sleeve is shrink wrapped within the black censorship cover. Black cover opens at top instead of folding over. "Made In Canada" sticker on back of outer black cover.
MISPRESS: Tracks B12 (Bass Rattle Stars Out The Sky) and B13 (Artificial Death In The West) are swapped on the vinyl.

"Distributed By Caroline" logo present together with labels' logos.

At the risk of appearing moribund, that phenomenon of big stunts and instant exits largely defines NO LOVE DEEP WEB, not just in release style but also in musical makeup. These 13 tracks thrive on paranoia and aggression, feelings threaded together by the sense that everything could be ending right now. With his voice squeezed above a heavy thud and electro chirp, MC Ride rolls the dice again, as he did on the balcony's ledge: "My life on a limb about to break." Across these 46 minutes, Ride creates a series of memento mori scenarios (and even goes so far as to invoke that phrase) and dares them to destroy him. As he puts it, "Fuck this world/ Fuck this body."

The record's most obvious example is "World of Dogs", which opens with the repetitive hook "It's all suicide" over Zach Hill's death-jazz drums. Crushed by its own quest for redemption, the grueling pace and noose-necked premise-- "Die with me/ Blow out the lights, take your life/ Ride the falling sky with me"-- make the song more grim than most black metal in 2012. The hook of "Lil Boy" is an invitation to burn brighter and faster, while the mortality-obsessed and especially corrosive "Lock Your Doors" includes a falling-from-life scream convincing enough to be sampled from a horror film. A minute later, Ride pictures the flame of a candle like the sand slipping through the hourglass: "Light the candle, burn the wax/ Before me dies, in scorch uprise/ Can't deny it, no way back." It's as if NO LOVE DEEP WEB was written and recorded knowing that its ultimate fate would either kill or catapult Death Grips. Essentially, the risk becomes the biggest reward.

After all, Death Grips' rage for some unnamed and very big system is written all across these tracks, and not just in the horror-house din of "Lock Your Doors" or the militaristic march of "No Love". MC Ride weaves networks of anxious and sometimes fatalistic visions; his phone's been tapped, and phantom footsteps sound just outside the door. At one point, he's stuck in a closed-circuit surveillance system, and he's the only one who can't watch. "Tongue cut out the mouth of reason, and chucked off the river's edge," he manages in one particularly manic span, again acknowledging the end waiting just at the other side of the precipice.