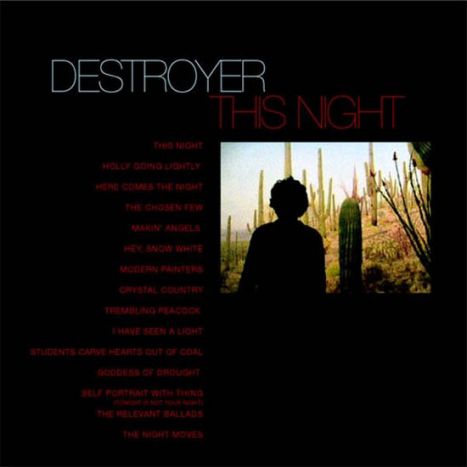 B1 The Chosen Few
B2 Makin' Angels
B3 Hey, Snow White


Destroyer may sound like it's a Trent Reznor side-project or the Kiss cover band that invades your local watering hole once a month, but let me assure you that it isn't anything of the sort. Instead, it is the nom de plume of enigmatic Canadian singer/songwriter Daniel Bejar, who has been quietly raising brows and engaging Vancouverites with his oddly constructed songs full of cryptic poetics for nearly six years.

Unfortunately, I didn't become aware of his talents until stumbling upon his fourth album, last year's brilliant Streethawk: A Seduction, which fused a glammy T. Rex/Bowie boogie with Crooked Rain-era Pavement pop. Even though it was released on the small indie label, Misra Records, it attracted quite a lot of attention and landed on a handful of year-end lists.

About the same time that Streethawk was released, Bejar also found himself critically and commercially lauded as one of the main songwriters for the Canadian pop juggernaut, The New Pornographers.

As their album, Mass Romantic, took flight, Bejar decided to ground himself and slowly back away from the band before this "side-project" swallowed Destroyer whole. He moved out of Vancouver and set off on a trek across Europe before settling back down in Montreal with a new cast of musicians to record his fifth album-and first for Merge Records-This Night.

From the beginning, it's clear that This Night is a different animal than Streethawk. On This Night, Bejar has transcended all of his influences and folded them into his own unique style. The Bowie vocal stylings are much less pronounced, and the crisp, punchy pop production of the previous album gives way to a sprawling, garage-y haze of layered guitars, organs and tinkling piano. The songs are stretched out like a double helix; subtly spiraling and revealing something new on every listen. Because of this, the album is initially a bit overwhelming or difficult to grasp. This Night is clearly not interested in exposing all of its secrets in the first handful of listens.

However, those who stick around will find a rich album that is complex in structure and subtle in sound. Hell, one could spend a couple hours just discussing the variety of tones that Bejar and lead guitarist, Nicholas Bragg, tease out of their instruments with an EBow. Like all great records, this one just gets better and better.

It's tough to pick out highlights when they change with every listen. Currently, the classical guitar and hand claps on "The Chosen Few" are treating me fine. But the melodica and clanging guitars in "Here Comes The Night" are pleasing, too. The jazzy pop of "Students Carve Hearts Out Of Coal" has a laid back, meandering vibe that will definitely appeal to Sea and Cake fans, while "Makin' Angels" redecorates Luna's Penthouse with backward guitar and piano. "Crystal Country" could be my favorite, with its sun-kissed guitars, blissful xylophone and honied backing vocals straight out of the '60s. "Goddess of Drought" is the best song Robert Pollard never wrote. Less accomplished musicians wouldn't be able to hold such a seemingly disparate set of songs together, but Bejar is able to pull it off.

Bejar's love of language is the one constant that runs through it all. He crafts lyrics with equal parts allusion and elusion, further solidifying the notion that he is capable of breathing the actual air of those elliptical souls, Stephen Malkmus and David Berman of the Silver Jews. Take the understated refrain in "Crystal Country": "She said / you'll always be alone / and she was right there." Bejar's dexterous wordplay is sure to send the lyric aficionados into paroxysms of pleasure, yet he isn't above poking fun at those of us who sit around, "deciphering what it means when the band goes-DooRah DooRah DooRah DooRah!!" Thank God he printed the lyrics in the sleeve this time!

Okay, I'm gushing. This album shows no signs of leaving my record player anytime soon. So, if you are a patient person looking for an album with a longer shelf life than the standard fare these days, This Night will not disappoint. It's unclear whether Bejar's eclectic sounds and knowing verbosity will ever allow him to be a star, but he's a shoo-in for cult figure status. Thirty years from now Sundazed is bound to meticulously reissue his entire catalogue and proclaim this inventive songwriter an overlooked genius.