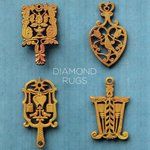 Not too dissimilar from the beginnings of Middle Brother, McCauley decided he wanted to make another record during his downtime in his new home base of Nashville with producers Adam Landry and Justin Collins (Middle Brother, Deer Tick). While attending a Los Lobos show (one of his all-time favorite bands), he made his way backstage and met Steve Berlin. McCauley convinced Berlin to come to Nashville to play on the record. Over the course of the next month, he also managed to convince Saint Pe (whom hed met once before), Morris (who had opened for Deer Tick on tour) and his good friend from his hometown of Providence, RI, Dufresne. McCauley also recruited Deer Tick keys/sax player Robbie Crowell to play bass on the album. What happened next was entirely unexpected; the musicians McCauley had recruited to play on his record, ended up contributing their own songs to the album and a fully-formed band emerged, rather than a group of musicians playing on another artists record.

I love Deer Tick, even if, as an old fogey, some of John McCauley's antics on stage are sometimes too much for me. (He started one show apologizing for having just dropped acid. I just wanted to say - be a professional, do it after I've paid to see you!) Even this band's name, according to John, is a play on the phrase "Die, I am on drugs." But for all of his sophomoric stunts, there's no denying John is an incredible talent and he can convey so many different feelings with that scractchy voice of his.

Here he provides the bulk of songs and they're terrific. As some critics have noted, they're very much in the rowdy, raucous vein of the last Deer Tick album "Divine Providence." As he did with the terrific Middle Brother album, when he joined forces with the lead singers of Dawes and Delta Spirit, John formed another alternative "supergroup" here with members of Dead Confederate, Black Lips, Los Lobos and Six Finger Satellite. I didn't know much about Dead Confederate until I saw Hardy Morris come on stage to do "Big God" with Deer Tick at a Boston concert and I was instantly impressed with the tune and its catchy chorus "It hurts to watch what you love so much."


There's another Morris tune on this album, Country Mile, which he says was written as a tribute to a friend in a wheelchair, and it is a great song that finishes with some very interesting psychedlic guitar work. Ian Saint Pe of Black Lips was another big discovery for me here.


He gets the album rolling with "Hightail" a solid, my lover done abandoned me lament, and later he seems to channel the ghost of Jim Carroll with another great song "Blue Mountains." As anyone who's seen a Deer Tick concert knows, John likes to do covers and there's a terrfic one here - as John takes lead vocal on the Mandarin Dynasty cover "I Took Note." When you're in a party mood and looking for some rowdy songs from a diverse range of talents, I think you can't go wrong with this one.


Diamond Rugs - Out On My Own