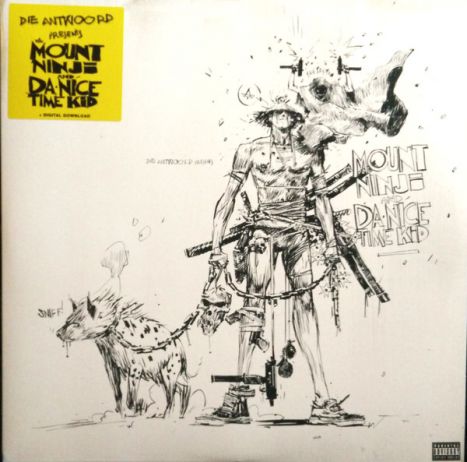 A1 We Have Candy
A2 Daddy
A3 Banana Brain

B3 Wings On My Penis

Mastered By – Dave Kutch
Barcode and Other Identifiers

Like most of the tunes on Mount Ninji, “Gucci Coochie” is most engaging when you turn your brain off. Like a more aggressive answer to ’90s electro outfit Prodigy, Die Antwoord manage to get as far as they do on sheer attitude and energy alone. Now under the mentorship of Cypress Hill/Soul Assassins anchor DJ Muggs(credited here as the Black Goat), Die Antwoord have grown more focused when it comes to crafting whole albums.

with Muggs and Chicago rapper God on hand as producers,

—Ninja declares that Muggs taught Die Antwoord to “unlock their hidden powers and rip the rap game a new asshole.” If that was the goal, there was really no way to prevent Mount Ninji from falling short.

Viewed through more modest expectations, though, Mount Ninji is not without its charms. The rapid-fire wordplay is crammed with tongue-in-cheek moments where Yolandi and Ninja switch on a dime between absurd braggadocio and clever self-deprecation. But even if you think that they’re getting better at their delivery, cleverness is not new territory for the pair who proved their mettle as performance artists well before they invented the characters they now play for a living.

Some of the album’s more out-there moments veer towards a demented form of cabaret where hip-hop serves more as a means to an end. It makes you wonder whether Die Antwoord would do better to market themselves as art-rap rather than the “real gangsta shit” that Cypress Hill’s Sen Dog rhymes about on “Shit Just Got Real.”