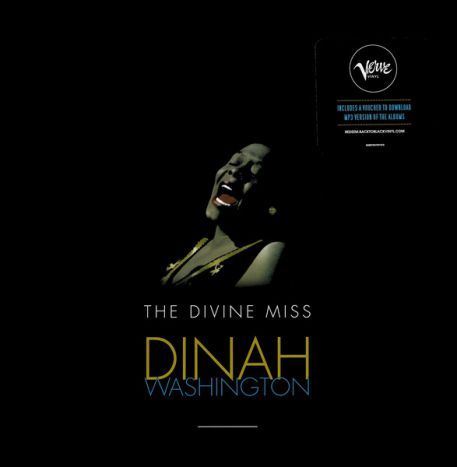 Label: Verve Records – 0600753787472
Format:
Box Set, Compilation
Vinyl, LP, Album, Reissue
Vinyl, LP, Album, Reissue
Vinyl, LP, Album, Reissue
Vinyl, LP, Album, Reissue
Vinyl, LP, Album, Reissue
180 grm vinyl
in sleeves that replicate the original artwork
Includes a voucher to download MP3 (320 kbit/s) version of the albums.
Barcode and Other Identifiers
Label Code: LC 01846
Country: Europe
Released: 2017
Genre: Jazz,
Style: Vocal, Rhythm & Blues, Blues, Pop
Tracklist
After Hours With Miss D
A1 Blue Skies
A2 Bye Bye Blues
A3 Am I Blue
A4 Our Love Is Here To Stay
B1 A Foggy Day
B2 I Let A Song Go Out Of My Heart
B3 Pennies From Heaven
B4 Love For Sale
Dinah Jams
C1 Lover Come Back To Me
C2 Alone Together, Summertime, Come Rain Or Come Shine
C3 No More
D1 I've Got You Under My Skin
D2 There Is No Greater Love
D3 You Go To My Head
For Those In Love
E1 I Get A Kick Out Of You
E2 Blue Gardenia
E3 Easy Living
E4 You Don't Know What Love Is
F1 This Can't Be Love
F2 My Old Flame
F3 I Could Write A Book
F4 Make The Man Love Me
F5 Ask A Woman Who Knows
F6 If I Had You
The Swingin' Miss "D"
G1 They Didn't Believe Me
G2 You're Crying
G3 Makin' Whoopee
G4 Ev'ry Time We Say Goodbye
G5 But Not For Me
G6 Caravan
H1 Perdido
H2 Never Let Me Go
H3 Is You Is Or Is You Ain't Ma Baby
H4 I'll Close My Eyes
H5 Somebody Loves Me
What A Diff'rence A Day Makes!
I1 I Remember You
I2 I Thought About You
I3 That's All There Is To That
I4 I Won't Cry Anymore
I5 I'm Thru With Love
I6 Cry Me A River
J1 What A Diff'rence A Day Makes
J2 Nothing In The World (Could Make Me Love You More Than I Do)
J3 Manhattan
J4 Time After Time
J5 It's Magic

J6 A Sunday Kind Of Love

.""After Hours With Miss D"  Some of the finest jazz recordings by Dinah - you can't go wrong - not a false move in the bunch - exceptional...
The "after hours" setting has Dinah singing with a relaxed jazz combo – one that features Eddie Lockjaw Davis and Paul Quinichette on tenor, Clark Terry on trumpet, and Junior Mance on piano – as well as some other nice touches, like congas from Candido, and a bit of organ work from Jackie Davis! "Dinah Washington and crew open with two wide-open numbers that feature instrumental solos in equal time (at least) to the vocals.
“Blue Skies” opens with pianist Junior Mance’s supportive intro behind Washington’s gorgeous out of time rendition of the first chorus. When things kick into a swinging mid-tempo shuffle complete with Clark Terry’s quickly realized horn arrangement, Washington’s vocals are no less convincing.
Eddie Davis is the first soloist, and he swings out with a gruff manner that suggests he’s muscling any clouds away. He’s followed by Terry, always the tasteful soloist, swinging so hard that one wonders how it’s possible. Mance takes a couple of choruses himself, throwing off his usual bluesy, soulful work—sounds effortless, which of course is part of his talent.
Rick Henderson, who had been working with Duke Ellington at the time of this recording (as was Clark Terry), offers his modern, sophisticated alto before Washington comes back to wail on the final choruses. “Bye Bye Blues” is done at a very fast tempo, and one can only surmise that the musicians were having a great time blowing on this one. Lots of outstanding solos abound, and it’s the perfect antidote to the slower numbers.
After the two intimate ballads, Washington and company perform jam session versions of “A Foggy Day” and “I Let A Song Go Out of My Heart.” Both songs are very relaxed, and both Washington and the soloists benefit from the apparent lack of pressure in the studio."
" Dinah Jams" "The casual setting of this one-day live session produced an uncompromisingly fiery album,  Washington rips, roars, and caresses her material, sometimes all at once, while leaving plenty of room for the likes of Clifford Brown, Clark Terry, and Max Roach to shine. "
" Dinah's voice, the most emotionnal one after Billie, always was one of my favorites,with Lil Green. Her incredibly sensual,...her magnificent diction and her blues-tinted ,popular accent moves me like mad.  This very relaxed,jam-session like recording session took place on August 14,1954 in L.A.
"Lover, come back to me", sumptuously recorded by Billie some years before, offers nine minutes and forty five seconds of pure joy, with great solos by Brownie, Geller, Mance, Clark Terry and the imperial Max Roach ."Alone together" ,a haunting ballad, features Harold Land's underrated tenor sax  .Dinah is back for a moving version of "come rain or come shine"; her blues and gospel tinted voice marvels.
The very rare "No more", a Bob Russell tune was outstandingly recorded by Billie on her Decca sides, at the end of the forties. Dinah's interpretation can easily match with Lady Day's.
"I've got you under my skin", Frank Sinatra's anthem, is introduced by Dinah with only Max Roach's african drumming; then comes the bass, then the piano and the rest of the band. What a swing !!! But would it be possible to miss such a beautiful tune ? Clark Terry and Brownie play magnificently,
. "There is no greater love" is another beautiful vocal by Dinah.
Then,"You go to my head" is another masterpiece. This very great standard, with magnificent lyrics, which must be extremely difficult to sing (just as Duke Ellington's "Azalea",for example) will be compared to Billie's  version (Verve Records), and surely will match. Eleven minutes of happiness. . I would have loved to be in this recording studio on that day. A very important record by the great Miss Dinah Washington... "
."For Those In Love"
"With such expert support, the singer's powerful phrasing, precise diction, and pitch-perfect intonation draw as much emotion and meaning possible out of her chosen material, including Billie-associated tunes like "Easy Living" and "My Old Flame." Dinah Washington was first and foremost a musician--not a showboat." ( all music)
".10 songs that match in perfection Dinah's style. No songs about happy love with easy lyrics, but instead, songs about more complex emotions... like "You don't know what love is" - a beautiful (and very famous) song about the true consequences of love that one experiences after a love lost. Dinah's voice (like Billie Holiday's) is one of those who put deep feeling above the simple act of crooning through a song. The second major thing about this album is the careful use of the band (again, Quincy Jones shows us his magic!): Not a big orchestra with a full string section, but a small band with Wynton Kelly(p), Clark Terry(t), Barry Galbraith(g) and other peak musicians. This means that we have the best band with some of the 50's top Jazz players who give Dinah the perfect space for her strong, firm and wide voice. And what a voice! She sings through "My Old Flame" and "Blue Gardenia" with sheer perfection! All the songs were carefully chosen " .
.The Swingin' Miss 'D' (w/Quincy Jones)
reuniting Dinahs superb vocals with the arranging talents of Quincy Jones.
Cut in 1956 with an all-star octet that included Clark Terry, Lucky Thompson and Wynton Kelly, the album explores the full range of the singer's talents, from ballads to blues. As Quincy Jones said "Once she put her soulful trademark on a song, she owned it and it was never the same".
"What A Diff'rence A Day Makes!"
, this is a ballad album and don't you dare be mad at this terrific artist especially with jazz musicians such as Kenny Burrell, a great arranger [who I had never heard before] using violins and backround chorus. I'ts Schmaltz but gorgeous schmaltz . Dinah always had beautiful diction and a unique voice, so much admired she was the icon for other talented vocalists-Esther Phillips and certainly Nancy Wilson!

Dinah Washington skirted the boundaries of blues, jazz and popular music, becoming the most treasured black female recording artist of the '50s.  Washington's song "What a Diff'rence a Day Makes" – has been entered into the Grammy Hall of Fame