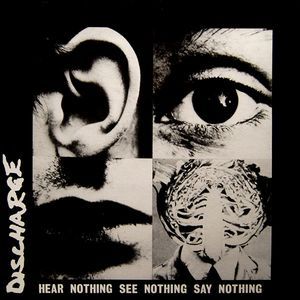 B1 A Hell On Earth
B2 Cries Of Help
B3 The Possibilities Of Life's Destruction
B4 Q: And Children? A: And Children
B5 The Blood Runs Red
B6 Free Speech For The Dumb
B7 The End

I originally picked up the vinyl version of this record in the early 80's and at that time I had no idea what I was in for. Hardcore mayhem rang through my small bedroom as I listened to the band from England that everyone had been talking about for months. Thunderous rhythms, ear-piercing guitar mayhem, and shouted vocals.


What more could you ask for? This made the Sex Pistols sound like the Carpenters. My goodness, my life was never the same. This record alone opened up my mind (as well as my ears) to the horrendous evil political powers of the world. I will always remember when these guys came to San Francisco, I was one of many young punks who witnessed the overwhelming power of this band's live performance. While this record stands the test of time, most of this band's later material is much to be desired.


After Discharge came on to the scene in the late-1970's, music in general would never be the same again. Discharge's music is some of the most influential music in the world, even 20 years later. They helped create a new genre of music, which took the power of metal and fused it with the politics and anger of punk. Discharge was one of the first, if not the first hardcore bands to come out of England. After I first heard Discharge about a year ago, I never looked at music the same again.

The way that they mix radical politics with the most powerful wall of sound I have ever heard is amazing. Many bands have followed in Discharge's footsteps and there will continue to be new bands influenced by Discharge. Now on to the album it self, this is most of Discharge's best work(especially with all the bounus tracks added, it almost plays like a greatest hits.)Songs like "The Possibility of Life's Destuction", and "I Won't Subscribe" are among the best on the album. Discharge gets right to the point and the songs usually are around two minutes or so of absolute chaos. So if you can get beyond nu-metal and grow in musical tastes, take Discharge on, besides it's probably better tham anything you listen to.


Discharge - Hear Nothing See Nothing Say Nothing (Full Album)

Discharge - A Hell on Earth